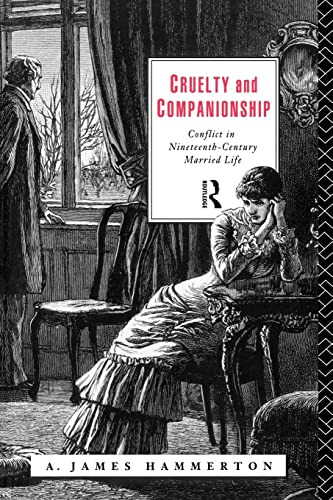 Cruelty and Companionship
by A. James Hammerton

In Stock
£5.49
'original, imaginative and challenging...brings concerns together about gender, the family, and wider currents in British social, cultural and even political experience in the second half of the 19th century.' - Leonore Davidoff
Very Good
Only 1 left

Cruelty and Companionship: Conflict in Nineteenth Century Married Life by A. James Hammerton

Cruelty and Companionship is an account of the intimate but darker sides of marriage in Victorian and Edwardian England. Hammerton draws upon previously unpublished material from the records of the divorce court and magistrates' courts to challenge many popular views about changing family patterns.
His findings open a rare window onto the sexual politics of everyday life and the routine tensions which conditioned marriage in middle and working class families. Using contemporary evidence ranging from prescriptive texts and public debate to autobiography and fiction, Hammerton examines the intense public scrutiny which accompanied the routine exposure of marital breakdown, and charts a growing critique of men's behaviour in marriage which increasingly demanded regulation and reform. The critical discourse which resulted, ranging from paternalist to feminist, casts new light on the origins and trajectory of nineteenth century feminism, legal change and our understanding of the changing expression of masculinity.

..."brings a rich and important study to a wider audience. ...helps to set the agenda for further studies of this important topic."
-"Social History
..."(an) earnest and energetic study...."
-"Choice
"This original, imaginative and important book brings together concerns about gender, the family and wider currents in British social, cultural and even political experience in the second half of the the nineteenth century."
-Leonore Davidoff, University of Essex
"An admirable project, with many features that immediately put it in a different class . . . fascinatingly subtle."
-"London Review of Books
"A stimulating, critical and cogent contribution to an important debate."
-"History

GOR002662064
Cruelty and Companionship: Conflict in Nineteenth Century Married Life by A. James Hammerton
A. James Hammerton
Used - Very Good
Paperback
Taylor & Francis Ltd
1995-10-26
248
0415133688
9780415133685
N/A
Book picture is for illustrative purposes only, actual binding, cover or edition may vary.
This is a used book - there is no escaping the fact it has been read by someone else and it will show signs of wear and previous use. Overall we expect it to be in very good condition, but if you are not entirely satisfied please get in touch with us.