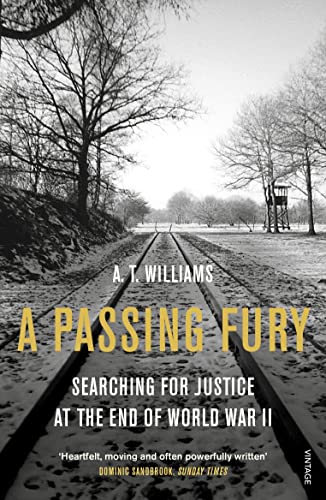 A Passing Fury
by A. T. Williams

In Stock
£5.49
A Daily Telegraph Book of the YearShortlisted for the CWA Gold Dagger for Non-Fiction 2017After the Second World War, the Nuremberg Tribunal became a symbol of justice in the face of tyranny, aggression and atrocity.
Very Good
Only 3 left

A Passing Fury: Searching for Justice at the End of World War II by A. T. Williams

A Daily Telegraph Book of the Year Shortlisted for the CWA Gold Dagger for Non-Fiction 2017 After the Second World War, the Nuremberg Tribunal became a symbol of justice in the face of tyranny, aggression and atrocity. But it was only a fragment of retribution as, with their Allies, the British embarked on the largest programme of war crimes investigations and trials in history. This book exposes the deeper truth of this endeavour, moving from the scripted trial of Goering, Hess and von Ribbentrop to the makeshift courtrooms where the SS officers, guards and executioners were prosecuted. It tells the story of the investigators, lawyers and perpetrators and asks the question: was justice done?

"[An] earnest, unsettling book... Williams is a thoughtful, lucid writer, with a lawyer's appetite for detail... A Passing Fury is heartfelt, moving and often powerfully written." -- Dominic Sandbrook * Sunday Times *
"Williams... carries the reader along in his fluent and passionate prose" -- Richard J. Evans * Guardian *
"A haunting, sensitive and thoughtful study" -- Nigel Jones * Daily Telegraph *
"Absorbing... Williams skilfully reveals a chaotic world in which war crimes investigation teams, generally lacking even the most basic resources, were left to do their best in extremely trying circumstances" * Scotsman *
"Williams has put together an original polemic against our assumptions about these trials, including those at Nuremberg." -- David Herman * New Statesman *

About A. T. Williams

A. T. Williams won the George Orwell Prize for Political Writing in 2013 for his book A Very British Killing: The Death of Baha Mousa. He lives in Warwickshire.

GOR008303551
A Passing Fury: Searching for Justice at the End of World War II by A. T. Williams
A. T. Williams
Used - Very Good
Paperback
Vintage Publishing
2017-05-04
496
0099593262
9780099593263
Short-listed for CWA Non-Fiction Dagger 2017 (UK)
Book picture is for illustrative purposes only, actual binding, cover or edition may vary.
This is a used book - there is no escaping the fact it has been read by someone else and it will show signs of wear and previous use. Overall we expect it to be in very good condition, but if you are not entirely satisfied please get in touch with us.