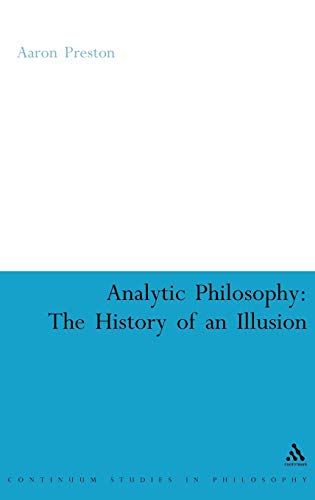 Analytic Philosophy: The History of an Illusion by Aaron Preston

From Kevin Robb, Professor of Philosophy (University of Southern California): Aaron Preston's book is an insightful study of what he rightly describes as "the peculiar career" of Analytic Philosophy. Preston's views are original and iconoclastic, going beyond the received view of analytic philosophy's history to link it to broader developments in the history of thought. His book makes an important contribution to the growing literature on analytic philosophy, and especially its history in the past century, one that will be of value to specialists and non-specialists alike.
"Preston is to be congratulated on having put the need for this sort of important investigation so firmly on the agenda."Philosophical Investigations
Journal for the History of Philosophy, 2009
'Aaron Preston has written an extremely clear and richly provocative book on the nature of analytic philosophy' William Larkin, Notre Dame Philosophical Reviews
'Well documented, detailed, cogent, clear, fascinating, often convincing, and always fun to read...This book is essential reading for anyone who wants to understand philosophy's contemporary situation - and how to get out of it.' Professor John McCumber, UCLA, USA
From Michael Beaney, University of York (UK): Preston writes in a very engaging and lucid style...Throughout, his writing is informed by an historiographical sensitivity and historical self-consciousness that is rarely found in philosophers trained in the analytic tradition
'...a significant contribution to the literature on the history of analytic philosophy - one that should stimulate much discussion and further work on the subject...a "must read" book for the field.' John Ongley, Editor, The Bertrand Russell Society Quarterly.
"This is an important book which, given the limited resources available at this point in the history of Analytic Philosophy, makes a highly persuasive case as to the nature and peculiarities of the discipline. It deserves a wide audience among analytic philosophers, and amongst anyone interested in the "peculiar career" of Analytic Philosophy..." "What is lost in a review such as this is the wealth of detail that Preston deploys in making his overall case...The great service that Preston has done is to illustrate precisely why history matters to philosophy, and most particularly to Analytic Philosophy, which arguably is now suffering from the ahistorical attitudes it has nursed for more than fifty years. What needs to happen now is a full revival of the history of AP as a serious and respected area of philosophical study. In this task, British analytic philosophy has a lot to do to catch up with the valuable work being done by Preston and others in the United States." - Thomas Akehurst, History of European Ideas, 2009
"There is much to admire in this book. It is beautifully written, and it draws on discoveries from an impressive range of fields. Preston finds instruction in metaphilosophy and the sociology of philosophy as well as in the latest scholarship on the history of early analytic thought. He makes an important contribution simply by bringing work from these disparate fields together...Preston makes a compelling case that analytic philosophy has never been as unified as we usually assume. He also argues convincingly that our failure to see this results from biases that are largely unphilosophical...Preston has not said the last word about the history and the problems of analytic philosophy. But he has made important discoveries about it, some of which are genuinely troubling. Future histories will have to take his discoveries seriously." -Robert Piercy, Philosophy in Review

Aaron Preston is Assistant Professor of Philosophy, Malone College (USA). Previously he was at University of Southern California. He has written several articles for journals (e.g. The Monist) and was runner-up for the Metaphysical Society of America Aristotle Prize (2000).

GOR010294214
Analytic Philosophy: The History of an Illusion by Aaron Preston
Aaron Preston
Continuum Studies in Philosophy
Used - Very Good
Hardback
Bloomsbury Publishing PLC
2007-03-08
204
0826490034
9780826490032
N/A
Book picture is for illustrative purposes only, actual binding, cover or edition may vary.
This is a used book - there is no escaping the fact it has been read by someone else and it will show signs of wear and previous use. Overall we expect it to be in very good condition, but if you are not entirely satisfied please get in touch with us.