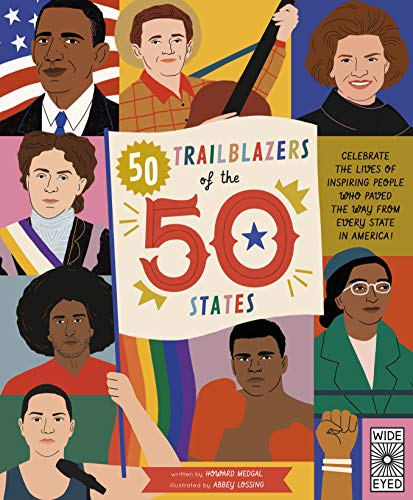 50 Trailblazers of the 50 States by Abbey Lossing

Meet 50 trailblazers who made the United States what it is today in this gorgeously illustrated biography book.

50 Trailblazers of the 50 States: Celebrate the lives of inspiring people who paved the way from every state in America!: Volume 8 by Abbey Lossing

Meet 50 trailblazers who made the United States what it is today in this gorgeously illustrated biography book.

With one trailblazer from every state, you'll discover how Rosa Parks from Alabama fought for civil rights, how Barack Obama from Hawaii proved an African-American could be President, how Joe Biden from Delaware protected women from domestic violence and how Betty Ford from Michigan improved treatment for drug addiction.

Each spread features a timeline of the trailblazer's life, key facts about their achievements and how their trailblazing continues today. By honouring people who strove in the areas of equal rights, feminism and environmentalism/conservation, this fact-packed book celebrates what makes America great, then and now.

The 50 States series of books for young explorers celebrates the USA and the wider world with key facts and fun activities about the people, history and natural environments that make each location within them uniquely wonderful. Beautiful illustrations, maps and infographics bring the places to colourful life.

Abbey Lossing is an illustrator and animator based in Brooklyn, NY. She grew up in Granville, Ohio, and relocated to NYC after attaining a degree in Illustration from Syracuse University. Having worked as a staff illustrator at BuzzFeed and then Vice News she took the leap into full-time freelance in 2017. Since then she hasworked with Facebook, Google, Target, The New York Times and The Washington Post. Working in Photoshop from initial sketch right to the coloured final, Abbey uses a Cintiq to maintain the presence of her hand in her digital work. Often inspired by fashion and textiles, she loves to integrate patterns into her work and when she's not working digitally she loves to revisit her background in screen printing and get her hands dirty. If she's not creating art, Abbey can usually be found walking the sidewalks of NYC, seeking out new food she's never tried.

Howard Megdal is a journalist and editor who has worked hard over his career to equalise coverage between both men and women's sports. His career has seen him work in many various rolls including as a sports columnist for POLITICO New York, Editorial Director for Excelle Sports and Editor-in-Chief for High Post Hoops. Howard is always curious, always seeking the deeper story, the connection between a stat and how it got that way, looking to shine a light on what is missed elsewhere. He has written for numerous publications including The New York Times, Sports Illustrated and Forbes.

NPB9781786039675
9781786039675
1786039672
50 Trailblazers of the 50 States: Celebrate the lives of inspiring people who paved the way from every state in America!: Volume 8 by Abbey Lossing
Abbey Lossing
The 50 States
New
Hardback
Wide Eyed Editions
20191105
112
N/A
Book picture is for illustrative purposes only, actual binding, cover or edition may vary.
This is a new book - be the first to read this copy. With untouched pages and a perfect binding, your brand new copy is ready to be opened for the first time
Trustpilot