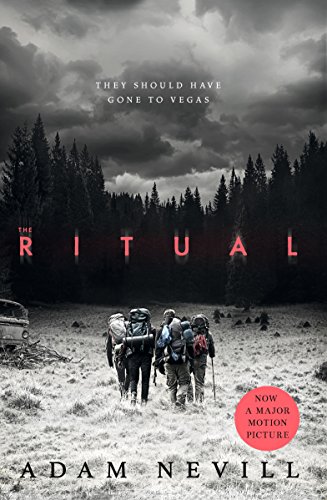 The Ritual
by Adam Nevill

The Ritual by Adam Nevill

From Britain's 'master of horror', Adam Nevill, comes The Ritual, winner of the August Derleth Award and perfect for fans of Stephen King. Now a major film with Rafe Spall.

In Adam Nevill's The Ritual, four old university friends reunite for a hiking trip in the Scandinavian wilderness of the Arctic Circle. No longer young men, they have little left in common and tensions rise as they struggle to connect. Frustrated and tired they take a shortcut that turns their hike into a nightmare that could cost them their lives.

Lost, hungry and surrounded by forest untouched for millennia, they stumble across an isolated old house. Inside, they find the macabre remains of old rites and pagan sacrifices; ancient artefacts and unidentifiable bones. A place of dark ritual and home to a bestial presence that is still present in the ancient forest, and now they're the prey.

As the four friends struggle toward salvation they discover that death doesn't come easy among these ancient trees . . .

This novel grabs from the very first page, refuses to be laid aside, and carries the hapless reader, exhausted and wrung out, to the very last sentence. * The Guardian *
Often horror loses its power when the evil is given a face; in this case it only gets more disturbing. * The Sunday Times *
With The Ritual Nevill has crafted some of the tensest scariest horror this reviewer has read for years. * SFX *
The Ritual by Adam Nevill is a mind-twisting journey into the dark backwoods of terror. Deeply disturbing and absolutely riveting. -- Jonathan Maberry, New York Times Bestselling author of Dead of Night and The King of Plagues
Nevill makes the natural world deeply menacing, using the power of suggestion rather than explicit images to create a growing claustrophobic feeling as the difficult journey to return to some semblance of civilization embeds the quartet only further in the grasp of primal evil. * Publishers Weekly *
If you want something to make you scared of going into the deep, dark woods then I would highly recommend you pick up The Ritual. The Gruffalo it ain't! * Geek Syndicate *
It has been over a week now since I finished this book and it has really stayed with me and I find myself thinking about it on numerous occasions, and this is another very good sign. * Fantasy Book Review *
The Ritual didn't just stop at sending a shiver down my spine, carrying on past that to leave me feeling all unsettled and resolved to stay away from large unexplored woods. A horror novel that leaves you feeling melancholy and thoughtful (as well as just plain scared); Neville is rapidly cementing his position as an author worth watching. * Graeme's Fantasy Book Review *
The Ritual, is now one of my all time favourite books, for me personally this is a powerful book that ticks every box in horror writing. * Gingernuts of Horror *

Adam L.G. Nevill was born in Birmingham, England, in 1969 and grew up in England and New Zealand. He is the author of the horror novels: Banquet for the Damned, Apartment 16, The Ritual, Last Days, House of Small Shadows, No One Gets Out Alive, Lost Girl and Under a Watchful Eye. His first short story collection, Some Will Not Sleep: Selected Horrors, was published on Halloween, 2016.

His novels, The Ritual, Last Days and No One Gets Out Alive were the winners of The August Derleth Award for Best Horror Novel. The Ritual and Last Days were also awarded Best in Category: Horror, by R.U.S.A. Many of his novels are currently in development for film and television, and in 2016 Imaginarium adapted The Ritual into a feature film.

GOR008702718
The Ritual by Adam Nevill
Adam Nevill
Used - Very Good
Paperback
Pan Macmillan
2017-10-19
448
1509883444
9781509883448
Winner of British Fantasy Award Best Horror Novel 2012 (UK)
Book picture is for illustrative purposes only, actual binding, cover or edition may vary.
This is a used book - there is no escaping the fact it has been read by someone else and it will show signs of wear and previous use. Overall we expect it to be in very good condition, but if you are not entirely satisfied please get in touch with us.