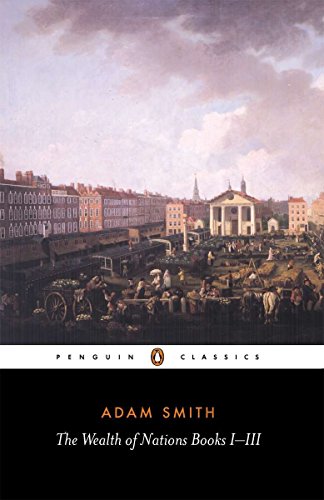 The Wealth of Nations
by Adam Smith

In Stock
5,99 £
Gives a comprehensive treatment of political economy. Originally delivered in the form of lectures at Glasgow, this book's includes the author's assessment of the mercantile system, his advocacy of the freedom of commerce and industry, and his famous prophecy that "America will be one of the foremost nations of the world".
Very Good Good Well Read
Only 4 left

The Wealth of Nations Summary

The Wealth of Nations: Books I-III by Adam Smith

Originally delivered in the form of lectures at Glasgow, Adam Smith's The Wealth of Nations Books I-III laid the foundations of economic theory in general and 'classical' economics in particular, and this Penguin Classics edition is edited with an introduction and notes by Andrew Skinner.

The publication of The Wealth of Nations in 1776 coincided with America's Declaration of Independence, and with this landmark treatise on political economy, Adam Smith paved the way for modern capitalism, arguing that a truly free market - fired by competition yet guided as if by an 'invisible hand' to ensure justice and equality - was the engine of a fair and productive society. Books I - III of The Wealth of Nations examine the 'division of labour' as the key to economic growth, by ensuring the interdependence of individuals within society. They also cover the origins of money and the importance of wages, profit, rent and stocks; but the real sophistication of his analysis derives from the fact that it encompasses a combination of ethics, philosophy and history to create a vast panorama of society.

This edition contains an analytical introduction offering an in-depth discussion of Smith as an economist and social scientist, as well as a preface, further reading and explanatory notes.

Adam Smith (1723-90) was born in Glasgow and educated at Glasgow and Oxford. Two years after his return to Scotland, Smith moved to Edinburgh, where he delivered lectures on Rhetoric. In 1751 Smith was appointed Professor of Logic at Glasgow, but was translated to chair of Moral Philosophy in 1752. The Theory of Moral Sentiments was published in 1759, and The Wealth of Nations in 1776, the same year as the Declaration of Independence.

If you enjoyed The Wealth of Nations, you might like Karl Marx's Capital, also available in Penguin Classics.

The Wealth of Nations Reviews

"Adam Smith's enormous authority resides, in the end, in the same property that we discover in Marx: not in any ideology, but in an effort to see to the bottom of things."
--Robert L. Heilbroner

Adam Smith (1723-90) taught both logic and moral philosophy at Glasgow University. His Wealth of Nations revolutionised the economic theories of the time. Andrew Skinner teaches at the Adam Smith Institute and is an expert on the author's work.

GOR001244721
The Wealth of Nations: Books I-III by Adam Smith
Adam Smith
The Wealth of Nations
Used - Very Good
Paperback
Penguin Books Ltd
1982-02-25
576
0140432086
9780140432084
N/A
Book picture is for illustrative purposes only, actual binding, cover or edition may vary.
This is a used book - there is no escaping the fact it has been read by someone else and it will show signs of wear and previous use. Overall we expect it to be in very good condition, but if you are not entirely satisfied please get in touch with us.