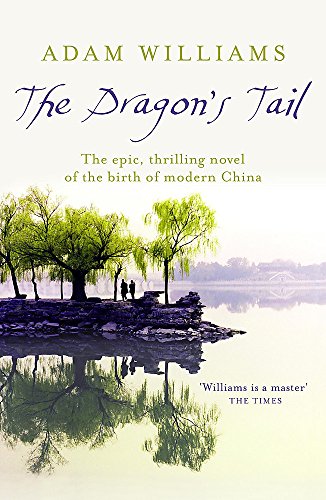 The Dragon's Tail
by Adam Williams

In Stock
£4.49
Two lovers are torn apart by politics and history in this epic romance of twentieth-century China, during a period of dizzying change.
Good
Only 1 left

The Dragon's Tail by Adam Williams

Harry Airton, a Scottish fisherman, has China in his blood. A chance encounter with a spook during the Korean War gives him the opportunity to return to the land of his birth and serve his goverment at the same time. They hatch a long-term plan to create the perfect spy: a triple agent with a cover that cant be broken, because its genuine.

What Harry doesnt realise is that if he is setting the perfect trap, the Communist Chinese may also be finding the perfect bait. And that as the Cold War escalates and China marches towards Cultural Revolution and the end of the twentieth-century, the fates of two people who love each other are entirely unimportant

'The Dragon's Tail is an epic sprawl . . . Meticulously recreating the past, Williams's exploration of the effect of the cultural revolution on the Chinese psyche is gripping stuff . . . a compelling account of a people's ability to survive in the face of adversity.' * Guardian *
Adam Williams has written a true epic, spanning many decades and incorporating real events of magnitude. It is not easy to explain historical context entertainingly, but Williams pulls it off. * The Times on THE DRAGON'S TAIL *
This is a magnificent climax to Adam Williams' epic trilogy covering the history of modern China . . . An extremely well plotted spy novel . . . it is a great read with strong and sympathetic characters struggling to maintain their humanity in the midst of the terrible events which engulfed China after 1949. The sections relating to the Chinese labour camps and the bitter betrayals of the survivors . . . raise the novel into the realm of high literature. Many people will read this for many years to come to understand China better. * Jasper Becker, author of The Chinese on THE DRAGON'S TAIL *
A bewitching, unpredictable spy thriller. A harrowing but noble love story. A mirror onto half a century of Chinese history - I have no doubt that this will become a classic. * James Kynge, author of China Shakes the World on THE DRAGON'S TAIL *
'This book is poetic and romantic in parts, harrowing and tragic in others . . . Persevere when the going gets tough and you'll be richly rewarded.' **** * Heat on THE EMPEROR'S BONES *
Epic . . . a story that suggests history is repeated not as farce, but as adventure and romance. * Financial Times on THE EMPEROR'S BONES *
An epic historical and romantic story as well as an impressive first novel. * Sunday Mirror on THE PALACE OF HEAVENLY PLEASURE *

Adam Williams, whose family has lived in China since the late nineteenth century, was born and raised in Hong Kong. For the last eighteen years he has been representative in Beijing of a Far East trading conglomerate. In 1999 he received an OBE for services to Sino-British trade. Adam lives in China and Italy and has three children. To find out more, visit Adam's website www.adam-williams.net or follow him on Twitter at twitter.com/_AdamWilliams.