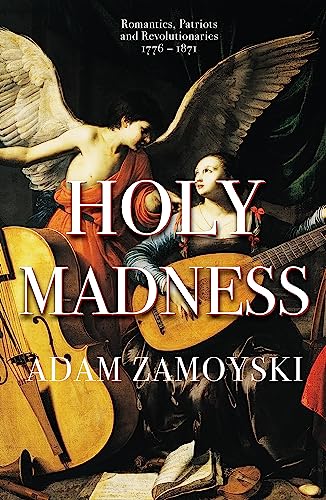 From America's fight for independence to the Paris Commune - an exotic collection of fanatics, adventurers, poets and thinkers are brought vividly to life.

Holy Madness probes into the psyche that was responsible for so many of the founding events of our modern world, and into the instincts that inspired its most generous and most murderous impulses. It explains how the Enlightenment dislodged Christianity from its central position in the life of European societies and how man's quest for ecstasy and transcendence flooded into areas such as the arts, spawning the Romantic movement.

This dramatic journey which begins in America in 1776 and goes right up to the last agony of the Paris Commune in 1871, takes in the French revolution, the Irish rebellion, the Polish risings, the war of Greek liberation, the Russian insurrection, the Hungarian struggles for freedom, the liberation of South America, and the Italian Risorgimento.

'An ambitious and in many ways brilliant book' Hilary Mantel

A benchmark that will revise our reading of this vivid period: that between the onset of the two Industrial Revolutions, between Blake and Balzac, which saw the birth and rise, not just of nationalism, but of internationalism -- Amanda Hopkinson * INDEPENDENT ON SUNDAY *
An ambitious and in many ways brilliant book -- Hilary Mantel * DAILY TELEGRAPH *
Adam Zamoyski's dashing account of the romantic movement, HOLY MADNESS, is bold narrative history at its most imaginative -- Michael Ignatieff * OBSERVER *
HOLY MADNESS is deceptive, a scholarly work written so attractively that it is easy to miss the deep themes which bring unity and purpose to the book -- Alan Palmer * LITERARY REVIEW *
Zamoyski's main narrative is a riveting tale of the standard bearers of nationalism from Jefferson to Garibaldi and from the American War of Independence to the Paris Commune of 1871. He achieves striking effects both through antinomy and a quasi-cinematic montage...a page-turner -- Frank McLynn * GLASGOW HERALD *
Adam Zamoyski, thankfully, has done [History] a splendid service. In this provocative book he reveals the vitality and importance of the religious impulse in explaining the revolutions, turmoil and nationalism of the years 1776-1871...The scope of HOLY MADNESS extends from America's fight for independence to the Paris Commune. An exotic collection of fanatics, adventurers, poets and thinkers are brought to life...Readers will be moved by Zamoyski's arrestingly written book to admiration for those often deluded Lafayettes and Garibaldis -- Robbie Millen * SPECTATOR *
Zamoyski is marvellous the way he develops so many ideas, showing the way that the new patriotism replaces religion and develops its own iconography in overtly religious terms, and the way that this revolutionary patriotism becomes, later, the parent to both fascism and communism -- Antony Beevor
Ambitious, stimulating and disturbing....the parade of heroism and folly he presents makes a riveting spectacle -- Rupert Christiansen * SUNDAY TELEGRAPH *
Adam Zamoyski's brilliant book will certainly become a classic of its kind. He covers not just France, Italy and Germany, but the whole of Europe - Spain, Poland, Ireland, Hungary, Russia, the Balkans, not forgetting Greece and, most significantly, America * CATHOLIC HERALD *
Splendidly descriptive, full of music and colour...both charming and learned -- John Lukacs * THE TIMES *
Zamoyski's canvas is so huge that sometimes he only skims the surface... But there will be few who will not learn much from him, and the elegance of his style makes him a real pleasure to read -- John Jolliffe * INDEPENDENT *