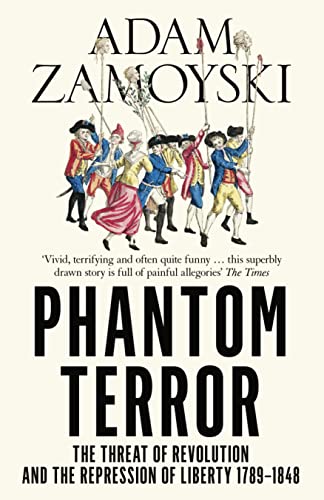 A magnificent and timely examination of an age of fear, subversion, suppression and espionage, Adam Zamoyski explores the attempts of the governments of Europe to police the world in a struggle against obscure forces, seemingly dedicated to the overthrow of civilisation.

Phantom Terror: The Threat of Revolution and the Repression of Liberty 1789-1848 by Adam Zamoyski

A magnificent and timely examination of an age of fear, subversion, suppression and espionage, Adam Zamoyski explores the attempts of the governments of Europe to police the world in a struggle against obscure forces, seemingly dedicated to the overthrow of civilisation.

The advent of the French Revolution confirmed the worst fears of the rulers of Europe. They saw their states as storm-tossed vessels battered by terrible waves coming from every quarter and threatened by horrific monsters from the deep. Rulers' nerves were further unsettled by the voices of the Enlightenment, envisaging improvement only through a radical transformation of existing structures, with undeniable implications for the future role of the monarchy and the Church.

Napoleon's arrival on the European stage intensified these fears, and the changes he wrought across Europe fully justified them. Yet he also brought some comfort to those rulers who managed to survive: he had tamed the revolution in France and the hegemony he exercised over Europe was a kind of guarantee against subversion. Once Napoleon was toppled, the monarchs of Europe took over this role for themselves.

However, the nature of their attempts to impose order were not only ineffectual, they also managed to weaken the bases of that order. As counter-productive as anything, for example, was the use of force. Reliance on standing armies to maintain order only served to politicize the military and to give potential revolutionaries the opportunity to get their hands on a ready armed force.

The wave of revolutions in 1848 might have embodied the climactic clash that many had come to expect, but it was no Armageddon, lacking the kind of mass support that rulers had dreaded and revealed the groundlessness of most of their fears. Interestingly, the sense of a great, ill-defined, subversive threat never went away, indeed it lingers on even today in the minds of world leaders.

Adam Zamoyski's compelling history explores how the rulers and governments of the time really did envisage the future and how they meant to assure it.

`Vivid, terrifying and often quite funny ... an interesting take on 1848 ... this superbly drawn story is full of painful allegories' The Times

`We know the Napoleonic era well, but the Decades after Napoleon's fall are often neglected. Adam Zamoyski covers those years, showing how fear of revolution caused the autocrats of Europe to repress freedom on an unprecedented scale' Simon Sebag Montefiore, Mail on Sunday

Adam Zamoyski was born in New York, was educated at Oxford, and lives in London. A full-time writer, his books include `Paderewski', `The Last King of Poland',`1812: Napoleon's Fatal March on Moscow', which was a Sunday Times bestseller, `Rites of Peace: The Fall of Napoleon and the Congress of Vienna', `Warsaw 1920' and `Chopin'. He is married to the painter Emma Sergeant.

GOR007296284
Phantom Terror: The Threat of Revolution and the Repression of Liberty 1789-1848 by Adam Zamoyski
Adam Zamoyski
Used - Very Good
Paperback
HarperCollins Publishers
2015-08-24
592
000728277X
9780007282777
N/A
Book picture is for illustrative purposes only, actual binding, cover or edition may vary.
This is a used book - there is no escaping the fact it has been read by someone else and it will show signs of wear and previous use. Overall we expect it to be in very good condition, but if you are not entirely satisfied please get in touch with us.