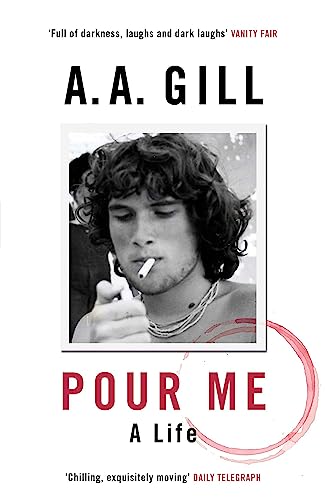 Pour Me by Adrian Gill

Shortlisted for the 2016 PEN Ackerley Prize, this is a compulsive memoir of addiction and recovery by A. A. Gill, 'by miles, the most brilliant journalist of our age' (Lynn Barber).

Pour Me: A Life by Adrian Gill

SHORTLISTED FOR THE 2016 PEN ACKERLEY PRIZE

'An intense, succulent read that's intermittently dazzling' THE TIMES
'Chilling, exquisitely moving' DAILY TELEGRAPH
'A superb memoir - and one of the best books on addiction I have ever read' EVENING STANDARD

A. A. Gill's memoir begins in the dark of a dormitory with six strangers. He is an alcoholic, dying in the last-chance saloon. He tells the truth - as far as he can remember it - about drinking and about what it is like to be drunk. He recalls the lost days, lost friends, failed marriages ... But there was also an 'optimum inebriation, a time when it was all golden'.

Sobriety regained, there are painterly descriptions of people and places, unforgettable musings about childhood and family, art and religion; and most movingly, the connections between his cooking, dyslexia and his missing brother.

Full of raw and unvarnished truths, exquisitely written throughout, POUR ME is about lost time and self-discovery. Lacerating, unflinching, uplifting, it is a classic about drunken abandon.