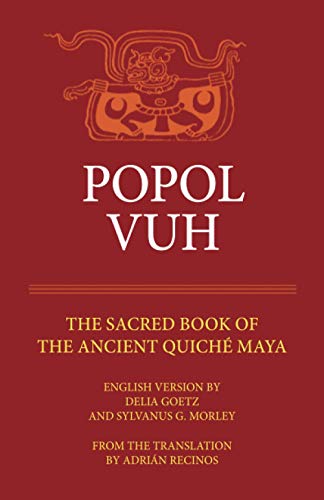 In Stock
£6.99
During the middle of the 16th century a literate Quiche Indian transcribed his folk legends into Latin script in his own language. This is the first complete English translation, taken from the Spanish version of the Guatemalan diplomat, linguist and ethnologist, Adrian Recinos.
Very Good Good
Only 1 left

This is the first complete version in English of the "Book of the People" of the Quiche Maya, the most powerful nation of the Guatemalan highlands in pre-Conquest times and a branch of the ancient Maya, whose remarkable civilization in pre-Columbian America is in many ways comparable to the ancient civilizations of the Mediterranean. Generally regarded as America's oldest book, the Popol Vuh, in fact, corresponds to our Christian Bible, and it is, moreover, the most important of the five pieces of the great library treasures of the Maya that survived the Spanish Conquest.

The Popol Vuh was first transcribed in the Quiche language, -but in Latin characters, in the middle of the sixteenth century, by some unknown but highly literate Quiche Maya Indian-probably from the oral traditions of his people. This now lost manuscript was copied at the end of the seventeenth century by Father Francisco Ximenez, then parish priest of the village of Santo Tomas Chichicastenango in the highlands of Guatemala, today the most celebrated and best-known Indian town in all of Central America.

The mythology, traditions, cosmogony, and history of the Quiche Maya, including the chronology of their kings down to 1550, are related in simple yet literary style by the Indian chronicler. And Adrian Recinos has made a valuable contribution to the understanding and enjoyment of the document through his thorough going introduction and his identification of places and people in the footnotes.

Adri n Recinos-who made a new Spanish translation from the original Xim'nez manuscript in Quiche after he had discovered differences, omissions, and changes in the text published by Brasseur de Bourbourg in 1861?is a distinguished diplomat as well as linguist, archaeologist, and ethnologist. For sixteen years (1928- 44), minister and ambassador to the United States from his native Guatemala, he received the honorary degree of Doctor of Laws from George Washington University in 1942. Now retired, he lives in Guatemala City, where he pursues his linguistic and archaeological avocations.

GOR004666253
Popol Vuh: Sacred Book of the Ancient Quiche Maya by Adrian Recinos
Adrian Recinos
Civilization of American Indian S.
Used - Very Good
Paperback
University of Oklahoma Press
1991-08-31
288
0806122668
9780806122663
N/A
Book picture is for illustrative purposes only, actual binding, cover or edition may vary.
This is a used book - there is no escaping the fact it has been read by someone else and it will show signs of wear and previous use. Overall we expect it to be in very good condition, but if you are not entirely satisfied please get in touch with us.