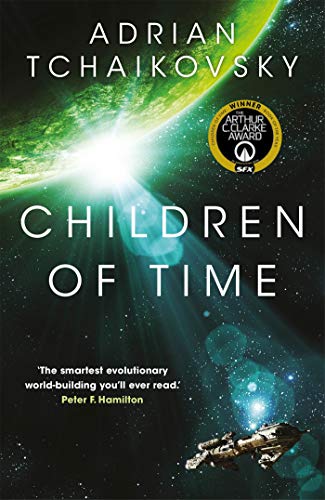 Children of Time
by Adrian Tchaikovsky

Used Price
£4,99
New RRP £8,99
Free Shipping in the UK
A race for survival among the stars . . . Humanity's last survivors escaped earth's ruins to find a new home. But when they find it, can their desperation overcome its dangers?
Very Good Good

Children of Time by Adrian Tchaikovsky

Adrian Tchaikovksy's critically acclaimed novel Children of Time, is the epic story of humanity's battle for survival on a terraformed planet.

Who will inherit this new Earth? The last remnants of the human race left a dying Earth, desperate to find a new home among the stars. Following in the footsteps of their ancestors, they discover the greatest treasure of the past age - a world terraformed and prepared for human life.

But all is not right in this new Eden. In the long years since the planet was abandoned, the work of its architects has borne disastrous fruit. The planet is not waiting for them, pristine and unoccupied. New masters have turned it from a refuge into mankind's worst nightmare.

Now two civilizations are on a collision course, both testing the boundaries of what they will do to survive. As the fate of humanity hangs in the balance, who are the true heirs of this new Earth?

'Children of Time is a joy from start to finish. Entertaining, smart, surprising and unexpectedly human.' - Patrick Ness, author of A Monster Calls.

Adrian Tchaikovsky was born in Woodhall Spa, Lincolnshire before heading off to Reading to study psychology and zoology. For reasons unclear even to himself he subsequently ended up in law and has worked as a legal executive in both Reading and Leeds, where he now lives. Married, he is a keen live role-player and occasional amateur actor, has trained in stage-fighting, and keeps no exotic or dangerous pets of any kind, possibly excepting his son.

He is the author of the critically acclaimed Shadows of the Apt series, Echoes of the Fall series, and Children of Time, the winner of the 30th Anniversary Arthur C. Clarke Award for Best Science Fiction Novel.

GOR007571333
Children of Time by Adrian Tchaikovsky
Adrian Tchaikovsky
The Children of Time Novels
Used - Very Good
Paperback
Pan Macmillan
2016-04-21
608
1447273303
9781447273301
Winner of The Arthur C. Clarke Award 2016 (UK)
Book picture is for illustrative purposes only, actual binding, cover or edition may vary.
This is a used book - there is no escaping the fact it has been read by someone else and it will show signs of wear and previous use. Overall we expect it to be in very good condition, but if you are not entirely satisfied please get in touch with us.