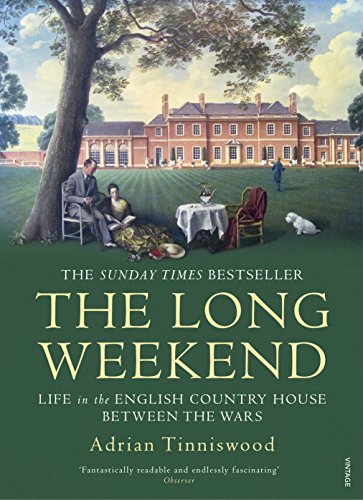 The Long Weekend
by Adrian Tinniswood

Out of Stock
£6.49
There is nothing quite as beautiful as an English country house in summer. And there has never been a summer quite like that Indian summer between the two world wars, a period of decline in which the sun set slowly on the British Empire and the shadows lengthened on the lawns of a thousand stately homes. The author uncovers the truth about them.
Very Good
Only 0 left

The Long Weekend: Life in the English Country House Between the Wars by Adrian Tinniswood

There is nothing quite as beautiful as an English country house in summer. And there has never been a summer quite like that Indian summer between the two world wars, a period of gentle decline in which the sun set slowly on the British Empire and the shadows lengthened on the lawns of a thousand stately homes.

Real life in the country house during the 1920s and 1930s was not always so sunny. By turns opulent and ordinary, noble and vicious, its shadows were darker. In The Long Weekend, Adrian Tinniswood uncovers the truth about a world half-forgotten, draped in myth and hidden behind stiff upper lips and film-star smiles.

Drawing on hundreds of memoirs, on unpublished letters and diaries, on the eye-witness testimonies of belted earls and unhappy heiresses and bullying butlers, The Long Weekend gives a voice to the people who inhabited this world and shows how the image of the country house was carefully protected by its occupants above and below stairs, and how the reality was so much more interesting than the dream.

[A] fantastically readable and endlessly fascinating book... Delicious, occasionally fantastical, revealing in ways that Downton Abbey never was. It is as if Tinniswood is at the biggest, wildest, most luxuriantly decadent party ever thrown, and he knows everyone. -- Rachel Cooke * Observer *
Tinniswood and his publishers should be congratulated for issuing this elegant, encyclopedic and entertaining history... We are in the company of a confident and skilled historian who understands the mores of his era and wears his learning lightly... This is a handsomely illustrated pick'n'mix of mansions, manors, castles and palaces.... Tinniswood expands our Sunday evening viewing with the kind of detail you can't invent... Deserves to be on every costume drama producer's bookshelf. -- Virginia Nicholson * The Times *
He has produced a luscious, summery book, full of amiable anecdotes and photographs of striking interiors, celebrating headstrong optimists who defied the defeatism of the times. The Long Weekend resembles a well-kept hothouse festooned with fruit ripe for the plucking. -- Richard Davenport-Hines * Sunday Times *
Wonderfully opulent, richly textured... The opening chapters of The Long Weekend paint an evocative picture... In telling us how the English country house changed, he is, of course, telling us how England changed too. -- Xan Brooks * Sunday Telegraph *
[A] masterpiece of social history. -- Roger Lewis * Daily Mail *
Many of Tinniswood's anecdotes are extraordinary... Painstakingly researched detail that makes The Long Weekend so entertaining... A rich, multilayered and well-illustrated account of a style of live that disappeared with the Second World War. Lovers of...Brideshead Revisited will relish it. -- Charlotte Heathcote * Sunday Express *
[A] deliciously jaunty and wonderfully knowledgeable book... Tinniswood displays a terrific insider's grasp of gossip, while cramming his text with the stories of sport, sex, food, royalty, design, ruination and joy that defined these mansions... Meticulous, irresistible story. -- Juliet Nicolson * Spectator *
This delicious book achieves completely what it sets out to do. -- Marcus Berkmann * Daily Mail *
Tinniswood gives us many entertaining stories about the whimsical extravagances of the new country-housers... The Long Weekend is a celebration of fantasy and yearning cunningly wrapped up in pragmatism and practicality: about ancient castles with top-notch plumbing. -- Lucy Lethbridge * Financial Times *
Almost indecently enjoyable... Splendidly contrary book... [Tinniswood has a] sharp pen and a squirrel's eye for detail... Erudite, funny and oddly poignant. -- Miranda Seymour * Literary Review *

Adrian Tinniswood OBE FSA is the author of fifteen books on social and architectural history, including Behind the Throne: A Domestic History of the Royal Household; The Long Weekend: Life in the English Country House Between the Wars, a New York Timesand Sunday Times bestseller; His Invention So Fertile: A Life of Christopher Wren and The Verneys: a True Story of Love, War and Madness in Seventeenth-Century England, which was shortlisted for the BBC/Samuel Johnson Prize. He has worked with a number of heritage organisations including the Heritage Lottery Fund and the National Trust, and is currently Senior Research Fellow in History at the University of Buckingham and Visiting Fellow in Heritage and History at Bath Spa University.

GOR009117494
The Long Weekend: Life in the English Country House Between the Wars by Adrian Tinniswood
Adrian Tinniswood
Used - Very Good
Paperback
Vintage Publishing
2018-06-07
416
0099592851
9780099592853
N/A
Book picture is for illustrative purposes only, actual binding, cover or edition may vary.
This is a used book - there is no escaping the fact it has been read by someone else and it will show signs of wear and previous use. Overall we expect it to be in very good condition, but if you are not entirely satisfied please get in touch with us.