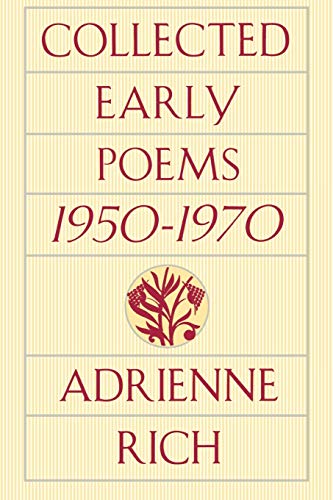 In Stock
£11.99
More than 200 poems collected from Adrienne Rich's first six books, plus a dozen others of those decades.
Very Good
Only 1 left

From their first publication, when Rich was twenty-one, in the prestigious Yale Younger Poets series, the successive volumes of her poetry have both charted the growth of her own mind and vision and mirrored our tempestuous, unsettled age. Her unmistakable voice, speaking even from the earliest poems with rare assurance and precision, wrestles with urgent questions while never failing to explore new poetic territory.

In Collected Early Poems, readers will once again bear witness to Rich's triumphant assertion of the centrality of poetry in our intertwined personal and political lives.

"This important volume charts the radical transformation of one of America's most significant poets." "Basic for a library of contemporary poetry." -- Fred Eckman