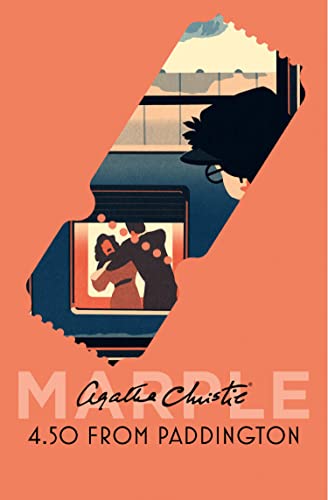 4.50 from Paddington
by Agatha Christie

For an instant the two trains ran together, side by side. In that frozen moment, Elspeth witnessed a murder. Helplessly, she stared out of her carriage window as a man remorselessly tightened his grip around a woman's throat. The body crumpled. Then the other train drew away.

But who, apart from Miss Marple, would take her story seriously? After all, there were no suspects, no other witnesses... and no corpse.

'A model detective story, there is never a dull moment.' The Times

'The suspense is agonising.' Daily Mail

'Without the female of the species, indeed, detective fiction would be in a bad way. Miss Christie never harrows her readers, being content to intrigue and amuse them.' Times Literary Supplement

'The great mistress of the last-minute switch is at it again... even the experts have given up any attempts to out-guess Miss Christie.' New Yorker

'Precisely what one expects: the most delicious bamboozling possible in a babble of bright talk and a comprehensive bristle of suspicion all adeptly managed to keep you much too alert elsewhere to see the neat succession of clues that catch a murderer we never so much as thought of.' New York Herald Tribune

GOR008843097
4.50 from Paddington (Miss Marple) by Agatha Christie
Agatha Christie
Miss Marple
Used - Like New
Paperback
HarperCollins Publishers
2016-12-29
288
0008196583
9780008196585
N/A
Book picture is for illustrative purposes only, actual binding, cover or edition may vary.
The book has been read, but looks new. The book cover has no visible wear, and the dust jacket is included if applicable. No missing or damaged pages, no tears, possible very minimal creasing, no underlining or highlighting of text, and no writing in the margins.