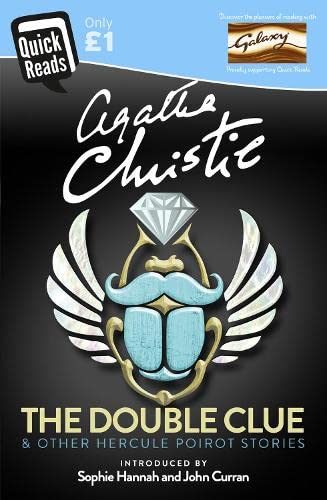 A perfect introduction to Agatha Christie - four of the best Hercule Poirot stories, chosen for their readability and sense of adventure.

The Double Clue (Quick Reads 2016): And Other Hercule Poirot Stories by Agatha Christie

A perfect introduction to Agatha Christie - four of the best Hercule Poirot stories, chosen for their readability and sense of adventure.

A man is found shot through the head in a locked room. A wealthy banker vanishes while posting a letter. A thief disappears with a haul of rubies and emeralds. And, in the golden sands of Egypt, the men who discovered an ancient tomb are dying one by one . . .

Hercule Poirot, the fussy Belgian detective with the egg-shaped head and immaculate moustache, solved some of the world's most puzzling crimes. This book contains four of the very best stories, selected by John Curran, author of Agatha Christie's Secret Notebooks, and Sophie Hannah, who wrote the brand new Hercule Poirot novel, The Monogram Murders.

Includes the stories `The Double Clue', `The Market Basing Mystery', `The Disappearance of Mr Davenheim' and `The Adventure of the Egyptian Tomb'.

Agatha Christie was born in Torquay in 1890 and became, quite simply, the best-selling novelist in history. Her books have sold over a billion copies in the English language and another billion in over 100 foreign languages. She is the author of 80 crime novels and short story collections, 19 plays, and six novels under the name of Mary Westmacott.

GOR007288155
The Double Clue (Quick Reads 2016): And Other Hercule Poirot Stories by Agatha Christie
Agatha Christie
Used - Very Good
Paperback
HarperCollins Publishers
2016-02-04
112
0008165092
9780008165093
N/A
Book picture is for illustrative purposes only, actual binding, cover or edition may vary.
This is a used book - there is no escaping the fact it has been read by someone else and it will show signs of wear and previous use. Overall we expect it to be in very good condition, but if you are not entirely satisfied please get in touch with us.