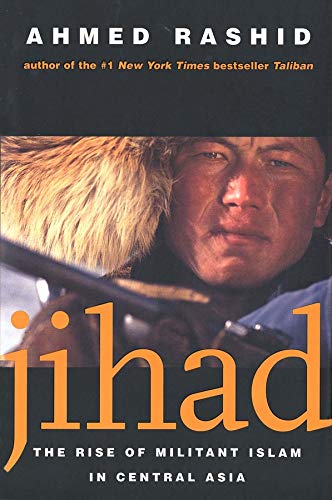 In Stock
£5.99
An exploration of the five Central Asian republics adjacent to Afghanistan - Kazakhstan, Uzbekistan, Turkmenistan, Kyrgyzstan and Tajikistan. Based on research and interviews, it explains the roots of militant rage in Central Asia and suggests ways in which this threat could be neutralised.
Very Good
7 in stock

Jihad: The Rise of Militant Islam in Central Asia by Ahmed Rashid

"For many years now, Ahmed Rashid has been the journalistic interpreter of the changing nature of Islam in Central Asia. He has always been ahead of the curve, and America's war on terrorism makes his new book more important than ever." Robert D. Kaplan, author of Warrior Politics "Jihad is but the latest of Ahmed Rashid's insightful books on religion and politics in South and Central Asia. It would be welcome at any time but is critical reading today. A must read for policymakers, scholars, the media, and informed citizens." John L. Esposito, author of Islamic Threat: Myth or Reality?

Ahmed Rashid is a journalist based in Lahore. He is the Pakistan, Afghanistan, and Central Asia correspondent for the Far Eastern Economic Review and the Daily Telegraph. He also writes for the Wall Street Journal.

Rashid's previous book, Taliban (published by Yale University Press), reached number one on the New York Times bestseller list and has been translated into more than twenty-five languages.

GOR002798640
Jihad: The Rise of Militant Islam in Central Asia by Ahmed Rashid
Ahmed Rashid
Used - Very Good
Hardback
Yale University Press
2002-01-11
304
0300093454
9780300093452
N/A
Book picture is for illustrative purposes only, actual binding, cover or edition may vary.
This is a used book - there is no escaping the fact it has been read by someone else and it will show signs of wear and previous use. Overall we expect it to be in very good condition, but if you are not entirely satisfied please get in touch with us.