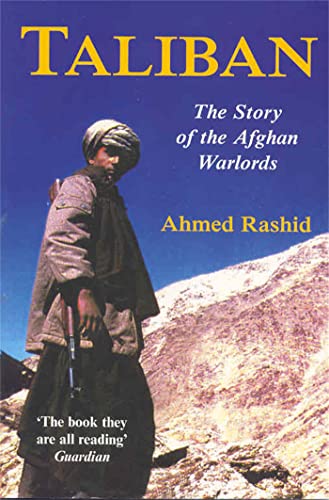 In Stock
£3.99
Prescient, bold and insightful this is the only book which takes you right to the heart of the Taliban regime. This is an indispensable book for our times.
Very Good
Only 2 left

Taliban: The Story of the Afghan Warlords by Ahmed Rashid

The definitive account of the history of the Taliban and its uncertain future.

This is the book that Tony Blair and Alistair Campbell consulted to gain a better impression of the unique circumstances of the Taliban. An exploration of the overwhelming complexity of Afghan politics, The Taliban: The Story behind the Afghan Warlords explains how it came in to being, how it is sustained and how Osama bin Laden has risen to such a figure of absolute power. Ahmed Rashid clarifies the often confusing racial and religious tensions that dominate this fractious land. And describes why the drug trade has exacerbated an already untenable situation. Rashid argues that Taliban is incapable of reform, and that, in the current crisis, it may implode due to defections. With the Northern Alliance an unpredictable alternative, Rashid concludes that without a multi-tribal government in which bordering states do not seek predominant influence, there will never be peace.

'Read this remarkable book and the bewildering complexity of Afghan politics and the deadly over-spill of chaos, narcotics and sectarian violence into the surrounding region will become clear.' Patrick Seale, Sunday Times

'Ahmed Rashid's book describes the stuff that Bond [films] are made of. Warring tribes, clashing empires, fanatics with dreams of world domination, violence and sex . If anyone understands the place Rashid does.' Jason Burke, Observer

Ahmed Rashid is a correspondent for The Daily Telegraph reporting on Pakistan, Afghanistan and Central Asia. He also broadcasts regularly with the BBC, CNN and other international news organisations. He has twice been selected for the list of Top 100 Global Thinkers by Foreign Policy. He is the author of Taliban.

GOR001198183
Taliban: The Story of the Afghan Warlords by Ahmed Rashid
Ahmed Rashid
Used - Very Good
Paperback
Pan Macmillan
2001-10-26
304
0330492217
9780330492218
N/A
Book picture is for illustrative purposes only, actual binding, cover or edition may vary.
This is a used book - there is no escaping the fact it has been read by someone else and it will show signs of wear and previous use. Overall we expect it to be in very good condition, but if you are not entirely satisfied please get in touch with us.