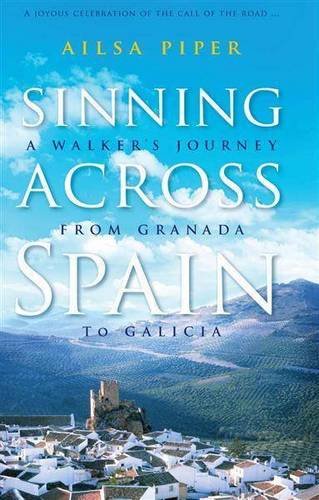 Sinning Across Spain
by Ailsa Piper

In Stock
£23.99
Sinning Across Spain is the story of Ailsa Piper's 1300 kilometre walk from the southern city of Granada to Galicia, "the bathtub of Spain", in the far northwest, carrying an unusual cargo. Aside from 10 kilograms of practicalities, she also lugged a load of sins in her swag.
Very Good
Only 1 left

Sinning Across Spain by Ailsa Piper

With these words Ailsa Piper's journey begins. Less than a month later she finds herself hiking through olive groves and under translucent pink blossoms, making her way from the legendary city of Granada, towards the cliffs at Finisterre in the far north-west of Spain.
On her back she carries an unusual cargoa "a load of sins. In the tradition of medieval believers who paid others to carry their sins to holy places, and so buy forgiveness, Ailsa's friends and colleagues donated sins in order to fund her quest. She's received anger and envy, pride and lust, among many.
Through glorious villages and inspiring landscapes, miracles find her. Matrons stuff gifts of homemade sausages into her pack. Angels in both name and nature ease her path.
Sins find her too. Those in her pack and many others tempt her throughout her journey.
And she falls in love: with kindness, with strangers, and with Spain.
Sinning Across Spain celebrates the mysteries of faith, the possibilities for connection, and the simple act of setting down one foot after the other.

Ailsa Piper has worked as a writer, theatre director, teacher, radio broadcaster, speaker and actor. She played a physio on Neighbours for three years, and wishes she had paid more attention to the massage moves she was taught. John Bell directed The Duchess of Malfi in July 2012a "a version co-adapted by Ailsa. Her play Small Mercies won the Patrick White Playwright's Award, and she has been nominated for Green Room awards as director and actor. She is yet to win an award for walking.

GOR010196535
Sinning Across Spain by Ailsa Piper
Ailsa Piper
Used - Very Good
Paperback
Melbourne University Press
2013-04-01
288
0522862500
9780522862508
N/A
Book picture is for illustrative purposes only, actual binding, cover or edition may vary.
This is a used book - there is no escaping the fact it has been read by someone else and it will show signs of wear and previous use. Overall we expect it to be in very good condition, but if you are not entirely satisfied please get in touch with us.