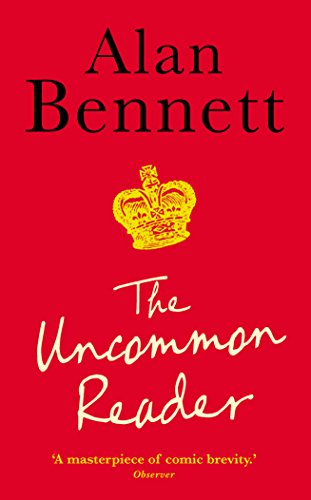 The Uncommon Reader
by Alan Bennett

In Stock
£3.29
Features none other than HM the Queen who drifts accidentally into reading when her corgis stray into a mobile library parked at Buckingham Palace. Her reading naturally changes her world view and her relationship with people like the oleaginous prime minister and his repellent advisers. The consequence is surprising, mildly shocking and funny.
Very Good Good
75 in stock

The Uncommon Reader by Alan Bennett

'Oh Norman,' said the Queen, 'the prime minister doesn't seem to have read any Hardy. Perhaps you could find him one of our old paperbacks on his way out.' Had the dogs not taken exception to the strange van parked in the royal grounds, the Queen might never have learnt of the Westminster travelling library's weekly visits to the palace. But finding herself at its steps, she goes up to apologise for all the yapping and ends up taking out a novel by Ivy Compton-Burnett, last borrowed in 1989. Duff read though it proves to be, upbringing demands she finish it and, so as not to appear rude, she withdraws another. This second, more fortunate choice of book awakens in Her Majesty a passion for reading so great that her public duties begin to suffer. And so, as she devours work by everyone from Hardy to Brookner to Proust to Samuel Beckett, her equerries conspire to bring the Queen's literary odyssey to a close. Subversive and highly enjoyable, The Uncommon Reader offers the perfect argument for reading, written by one of its great champions, Alan Bennett.

For all its hilarity The Uncommon Reader has a heartfelt tone. It offers a lament on old age, some thoughts on reticence and a backward glance at a life wasted. * Sunday Times *
An exquisitely produced jewel of a book. * The Times *
Pure gold ... you would be hard put to find a defter satire on British philistinism ... the dialogue is priceless. * Mail on Sunday *
Light, fresh, witty and warm. * Daily Telegraph *
Alan Bennett's The Uncommon Reader would make a perfect stocking filler for just about anyone. -- Monica Ali * The Guardian *

The film adaptation of the hit play The Lady in the Van is out now in the UK.Alan Bennett has been one of our leading dramatists since the success of Beyond the Fringe in the 1960s. His television series Talking Heads has become a modern-day classic, as have many of his works for the stage. At the National Theatre, London, The History Boys won numerous awards including Evening Standard and Critics' Circle awards for Best Play, an Olivier for the Best New Play and the South Bank Award. His play The History Boys was the National Theatre's most successful production ever. His collection of prose Writing Home was a number one bestseller. Untold Stories won the PEN/Ackerley Prize for autobiography, 2006. Recent works of fiction are The Uncommon Reader and Smut: Two Unseemly Stories.

GOR000825895
The Uncommon Reader by Alan Bennett
Alan Bennett
Used - Very Good
Paperback
Profile Books Ltd
2008-07-01
128
1846681332
9781846681332
N/A
Book picture is for illustrative purposes only, actual binding, cover or edition may vary.
This is a used book - there is no escaping the fact it has been read by someone else and it will show signs of wear and previous use. Overall we expect it to be in very good condition, but if you are not entirely satisfied please get in touch with us.