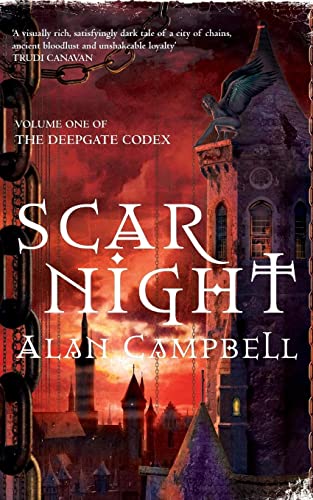 Used Price
£3.19
New RRP £18.99
Free Shipping in the UK
First in a trilogy, this magnificently colourful epic of urban fantasy opens up an intricate new world of unforgettable characters and thrilling events, in the best tradition of Gormenghast
Reviews:
Trustpilot
Very Good Good

Scar Night: Book One of the Deepgate Codex by Alan Campbell

For nine hundred generations, the city of Deepgate has hung suspended by giant chains over a seemingly bottomless abyss. In the unfathomable darkness below is said to reside the dread god Ulcis, `hoarder of souls', with his army of ghosts. Outside the city extend the barren wastes of Deadsands, inhabited by the enemy Heshette, so that safe access is guaranteed only by a fleet of airships.

At the hub of the city itself rises the Temple, in one of whose many crumbling spires resides a youthful angel, Dill, the last of his line. Descendant of heroic battle-archons, yet barely able to wield the great sword he has inherited from his forebears, he lives a sheltered existence under the watchful eye of Presbyter Sypes, who rules the Temple. For despite his sense of purposelessness, Dill has a destiny about to unfold - one that will take him down into terrifying depths of the pit in a desperate quest to save the teeming but precarious city from total annihilation at the hands of a cunning and resourceful traitor.

GOR001061928
Scar Night: Book One of the Deepgate Codex by Alan Campbell
Alan Campbell
Deepgate Codex
Used - Very Good
Paperback
Pan Macmillan
2007-05-04
560
033044476X
9780330444767
N/A
Book picture is for illustrative purposes only, actual binding, cover or edition may vary.
This is a used book - there is no escaping the fact it has been read by someone else and it will show signs of wear and previous use. Overall we expect it to be in very good condition, but if you are not entirely satisfied please get in touch with us.