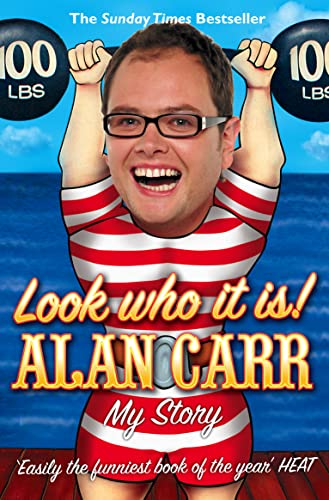 Look who it is!
by Alan Carr

Alan Carr tells his life story in his own words, from growing up in a football-mad family in Northampton to his rise as one of Britain's best-loved comedians.

Look who it is! Summary

Look who it is!: My Story by Alan Carr

Alan Carr tells his life story in his own words, from growing up in a football-mad family in Northampton to his rise as one of Britain's best-loved comedians.

`Puberty had been unkind. Whereas it had come in the night and left the other boys with chiselled, stubbly chins and deep masculine voices, I'd been left with a huge pair of knockers and the voice of a pensioner.' Alan Carr

Alan Carr grew up in one of the most boring towns in England - Northampton. A place known for making shoes. It was also known for its football club, Northampton Town FC. Alan's dad as manager of the club was a local hero. A dream come true for most lads, but not Alan. Alan wore glasses and had man boobs at 14. He did not like P.E.

In his very first book, Alan tells his life story, (`oh and what a life') with his unique twist of natural, observational humour -

`I'm not saying I'm a fantasist but there have been times when things that I've seen on television when I was younger have tended to seep into my subconscious and blended into my own life. I remember telling my Mum about the time I stopped that woman from having a diamond encrusted necklace stolen and she'd say `No Alan, that was Poirot.'

With his tongue-in-cheek, end of pier humour that made him famous, Alan describes an ordinary life in bursts of technicolour. His journey from awkward schoolboy hiding his man-boobs on the pitch, drinking tea with the dinner ladies and working in a call centre, to becoming one of our best-loved comedians likened to the great Frankie Howerd, make his book a guaranteed tickler with a laugh-out-loud gag on every page.

Look who it is! Reviews

`Carr's comic timing works every bit as well on the page as it does on stage, making this easily the funniest book of the year.'***** HEAT

`joyous stuff that anyone can relate to.' Independent

`...written in a good-hearted, amusing tone but manages nonetheless to be quite candid.' Sunday Express

`[He] mixes the populism of Peter Kay with the camp of Larry Grayson.' Evening Standard

Alan Carr was born in Weymouth in 1976 and grew up mainly in Northampton. He is the son of football manager Graham Carr. He won the BBC New Comedian of the Year in 2001 and his stand-up tour, filmed for a DVD Tooth Fairy; was a nation-wide sell-out. Alan lives in London.

GOR001177386
Look who it is!: My Story by Alan Carr
Alan Carr
Used - Very Good
Paperback
HarperCollins Publishers
2009-05-28
320
0007278233
9780007278237
N/A
Book picture is for illustrative purposes only, actual binding, cover or edition may vary.
This is a used book - there is no escaping the fact it has been read by someone else and it will show signs of wear and previous use. Overall we expect it to be in very good condition, but if you are not entirely satisfied please get in touch with us.