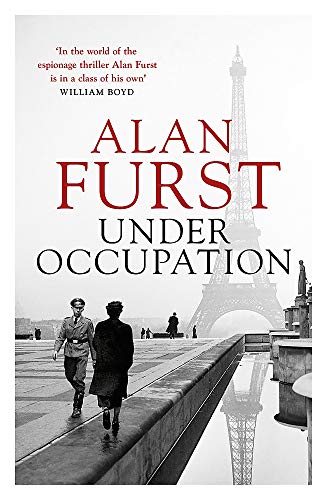 Under Occupation by Alan Furst

Spying and subterfuge in occupied Paris from one of the great masters of the spy genre. Inspired by the true story of Polish prisoners in Nazi Germany, who smuggled valuable intelligence to the French resistance.

Under Occupation: The Times thriller of the month, from the master of the spy novel by Alan Furst

THE TIMES THRILLER OF THE MONTH: 'MAGNIFICENT'

'ALAN FURST IS IN A CLASS OF HIS OWN' William Boyd

Occupied Paris, 1942.
In the dark, treacherous city, the German occupying forces are everywhere-and so are French resistance fighters, working secretly to defeat Hitler.

Just before he dies, a man being chased by the Gestapo hands off a strange-looking document to the unsuspecting novelist Paul Ricard. It looks like a blueprint of a part for a military weapon - one that might have important information for the Allied forces - and Ricard realizes he must try to get it into the hands of members of the resistance network.

As he finds himself drawn deeper and deeper into anti-German efforts, Ricard travels deep into enemy territory and along the escape routes of underground resistance safe houses, spying on Nazi maneuvers. And when he meets the mysterious and beautiful Leila, a professional spy, they begin to work together to get crucial information out of France and into the hands of the Allied forces in London.

ALAN FURST - The master of the historical spy novel

'Furst is an addiction' The Times

'If you are a John le Carre' fan, this is definitely a novel for you' James Patterson on Mission to Paris

'If any thriller writer has absolutely nailed a time and place in which to set his fiction, in this case France and Eastern Europe at the beginning of World War II, it is the American master of historical spy-fi Alan Furst ... Alan Furst is a master of his chosen material and his writing is cool, calm and very collected and proves, yet again, that he is one of the truly great writers of espionage fiction. * Shots Magazine *
Furst's novels are often seen as historical thrillers because they are set in WWII but there is no need to look to the sub-set for reputation, he stands with the best in the espionage genre. * NB Magazine *

PRAISE FOR ALAN FURST, THE MASTER OF THE HISTORICAL ESPIONAGE NOVEL

'Furst is an addiction' The Times

'If you are a John le Carre' fan, this is definitely a novel for you' James Patterson on Mission to Paris

'Furst's books are like Chopin's nocturnes: timeless, transcendent, universal. One does not so much read them as fall under their spell' Los Angeles Times

Alan Furst is widely recognised as the master of the historical spy novel. Now translated into eighteen languages, he is the author of novels including MISSION TO PARIS, SPIES OF THE BALKANS - a TV Book Club choice - THE SPIES OF WARSAW, which became a BBC mini-series starring David Tennant and THE FOREIGN CORRESPONDENT.

Born in New York, he lived for many years in Paris and travelled as a journalist in Eastern Europe and Russia. He has written extensively for Esquire and the International Herald Tribune. He now lives in Long Island.

GOR010128689
Under Occupation: The Times thriller of the month, from the master of the spy novel by Alan Furst
Alan Furst
Used - Very Good
Hardback
Orion Publishing Co
2019-11-14
224
1474610544
9781474610544
N/A
Book picture is for illustrative purposes only, actual binding, cover or edition may vary.
This is a used book - there is no escaping the fact it has been read by someone else and it will show signs of wear and previous use. Overall we expect it to be in very good condition, but if you are not entirely satisfied please get in touch with us
Trustpilot