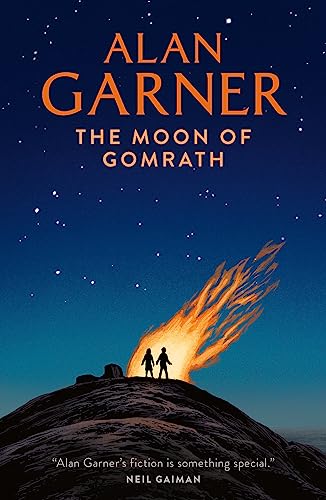 The Moon of Gomrath
by Alan Garner

The Moon of Gomrath Summary

The Moon of Gomrath by Alan Garner

It is the Eve of Gomrath - the night of the year when the Old Magic is aroused. Had Colin and Susan known this, they would never have lighted a fire on the Beacon, thereby releasing the uncontrollable ferocity of the Wild Hunt. Soon they are inextricably caught up in the struggle between their friend, the Wizard Cadellin, and the evil Morrigan.

The strength of their courage will determine whether or not they survive the awaiting ordeal...

The Moon of Gomrath Reviews

Critical acclaim from 1963: "It is not only powerful but remarkably sophisticated." The Guardian "Weird and marvellously evocative tale of Celtic mysteries, elves, spirits and strange presences felt, mingled to make high adventure for Colin and Susan -- and peril for Susan. It is a timeless story, full of wonder and magic, terror and beauty. A fine author indeed, and perhaps one of a new generation of classics." Books and Bookmen

GOR007986054
The Moon of Gomrath by Alan Garner
Alan Garner
Used - Like New
Paperback
HarperCollins Publishers
2002-09-02
224
0007127871
9780007127870
N/A
Book picture is for illustrative purposes only, actual binding, cover or edition may vary.
This is a used book - there is no escaping the fact it has been read by someone else and it will show signs of wear and previous use. Overall we expect it to be in very good condition, but if you are not entirely satisfied please get in touch with us.