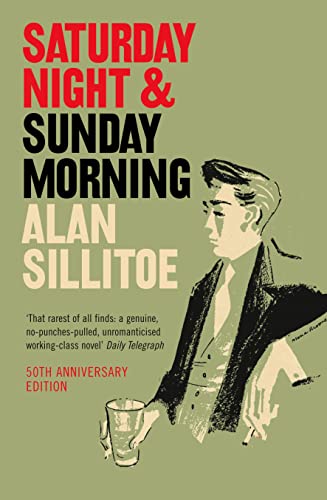 This cult classic of working class life in post-war Nottingham follows the exploits of rebellious factory worker Arthur Seaton and is introduced by Richard Bradford.

This cult classic of working class life in post-war Nottingham follows the exploits of rebellious factory worker Arthur Seaton and is introduced by Richard Bradford.

Working all day at a lathe leaves Arthur Seaton with energy to spare in the evenings. A hard-drinking, hard-fighting hooligan, he knows what he wants, and he's sharp enough to get it.

Before long, his carryings-on with a couple of married women become the stuff of local gossip. But then one evening he meets a young girl and life begins to look less simple...

First published in 1958, `Saturday Night and Sunday Morning' achieved instant critical acclaim and helped to establish Alan Sillitoe as one of the greatest British writers of his generation. The film of the novel, starring Albert Finney, transformed British cinema and was much imitated.

`That rarest of all finds: a genuine no-punches-pulled, unromanticised working class novel. Mr Sillitoe is a born writer, who knows his milieu and describes it with vivid, loving precision.' Daily Telegraph

`His writing has real experience in it and an instinctive accuracy that never loses its touch. His book has a glow about it as though he had plugged it into some basic source of the working-class spirit.' Guardian

Alan Sillitoe was born in 1928 and left school at 14 to work in various factories. He began writing after four years in the RAF, and lived for six years in France and Spain. His first stories were printed in the `Nottingham Weekly Guardian'. In 1958 `Saturday Night and Sunday Morning' was published and `The Loneliness of the Long Distance Runner', which won the Hawthornden prize for Literature, came out the following year. Both these books were made into films.

GOR001419368
Saturday Night and Sunday Morning by Alan Sillitoe
Alan Sillitoe
Used - Very Good
Paperback
HarperCollins Publishers
2006-05-15
240
0007205023
9780007205028
N/A
Book picture is for illustrative purposes only, actual binding, cover or edition may vary.
This is a used book - there is no escaping the fact it has been read by someone else and it will show signs of wear and previous use. Overall we expect it to be in very good condition, but if you are not entirely satisfied please get in touch with us.