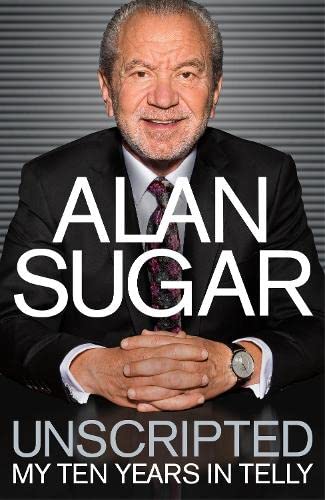 Unscripted: My Ten Years in Telly by Alan Sugar

As the star of the award-winning BBC series The Apprentice, Alan Sugar has won millions of fans who tune in to watch his mix of business wisdom, witty putdowns and ability to cut straight through bullshit. But how did the famously straight-talking entrepreneur end up fronting one of our most successful and long-running shows, and why were some of his biggest challenges during his ten years in television to be found outside the boardroom and off camera?

In Unscripted, Alan Sugar reveals all this and more as he embarks on a new and sometimes bewildering career. He describes how he lost patience with some of the luvvies, wafflers and wannabes he encountered along the way, and tells us what he really thought of some of the tasks and candidates he came across during the making of The Apprentice, giving his reaction to the egos and the backbiting as well as the genuine talent that shone through. He explains how he brought on board Nick Hewer, Margaret Mountford and Karren Brady, what became of the winners when the cameras stopped rolling - and how working on the show has inspired him and many others. As with his previous books, What You See Is What You Get and The Way I See It, there is no ghostwriter; this is written by the man himself. And, as ever, it is honest, funny and outspoken - Alan Sugar at his entertaining best.

Lord Sugar is the owner of Amshold Group Ltd and the popular star of the long-running BBC series The Apprentice. Born in the East End of London, he is a self-made multi-millionaire whose entrepreneurial flair and talent for innovation saw him take his electronics company Amstrad from a one-man operation to an international market-leader. He was knighted in 2000. In 2009 the Prime Minister, Gordon Brown, appointed him as Enterprise Champion, to advise the government on small business and enterprise and he was also awarded a life peerage becoming Alan, Baron Sugar of Clapton, in the London Borough of Hackney. He is the author of two top 10 bestselling books, What You See is What You Get and The Way I See It. His latest book is Unscripted. Photographer credit: Paul Marc Mitchell
GOR007013734
9781509803064
1509803068
Unscripted: My Ten Years in Telly by Alan Sugar
Alan Sugar
Used - Very Good
Hardback
Pan Macmillan
2015-09-24
320
N/A
Book picture is for illustrative purposes only, actual binding, cover or edition may vary.
This is a used book - there is no escaping the fact it has been read by someone else and it will show signs of wear and previous use. Overall we expect it to be in very good condition, but if you are not entirely satisfied please get in touch with us
Trustpilot