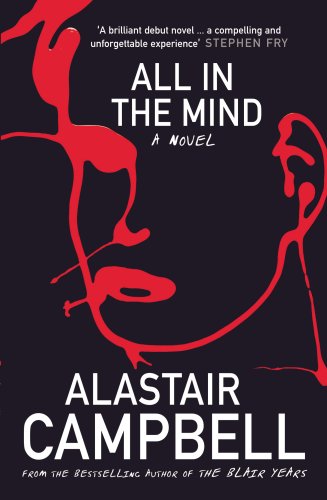 All in the Mind
by Alastair Campbell

In Stock
£3.99
Martin Sturrock desperately needs a psychiatrist. Very different Londoners, but they share one thing: every week they spend an hour at the Prince Regent hospital, revealing the secrets of their psyche to Professor Martin Sturrock. Little do they know that Sturrock's own mind is not the reassuring place they believe it to be.
Very Good Good
7 in stock

All in the Mind Summary

All in the Mind by Alastair Campbell

Martin Sturrock desperately needs a psychiatrist. The problem? He is one. Emily is a traumatised burns victim, Arta a Kosovan refugee recovering from a rape. David Temple is a longterm depressive, while the Rt Hon Ralph Hall MP lives in terror of his drink problem being exposed. Very different Londoners, but they share one thing: every week they spend an hour at the Prince Regent hospital, revealing the secrets of their psyche to Professor Martin Sturrock. Little do they know that Sturrock's own mind is not the reassuring place they believe it to be. For years he has hidden in his work, ignoring his demons. But now his life is falling apart, and as his ghosts come back to haunt him, the only person he can turn to is a patient. Set over a life-changing weekend, Alastair Campbell's astonishing first novel delves deep into the human mind to create a gripping portrait of the strange dependency between patient and doctor. Both a comedy and tragedy of ordinary lives, it is rich in compassion for those whose days are spent on the edge of the abyss.

All in the Mind Reviews

"A sympathetic foray into mental instability ... Campbell's own experience of breakdown brings an intensity to Sturrock's decline" * Financial Times *
"A serious subject adddressed with compassion, intelligence and sensitivity ... this is an emotionally engaging and thought-provoking book" * The Times *
"Extremely absorbing, moving and compassionate portrayal of ordinary human beings exhibiting extraordinary courage in challenging circumstances ... If Campbell writes more novels, I'll certainly read them" * The Independent *
"Campbell has written a highly sensitive novel ... A moving account of people's suffering and search for help" -- Dr David Sturgeon, University College London Hospital * The Guardian *
"An extraordinarily open and brave novel about weakness. Or, more accurately, humility ... its power comes from a clearly articulated insight into the darker workings of the human mind and the complex nature of mental health" * The Mirror *

Alastair Campbell was born in Keighley, Yorkshire in 1957, the son of a vet. After graduating from Cambridge University in modern languages, his first chosen career was journalism, principally with the Mirror Group, a career interrupted in the mid-80s by a nervous breakdown and the diagnosis of a drink problem. Campbell worked his way back to become a political editor and when Tony Blair became leader of the Labour Party, he asked Campbell to be his press secretary. He worked for Blair - first in that capacity, then as official spokesman and director of communications and strategy - from 1994 to 2003, and returned in 2005 to help Labour win a third election. He now splits his time between writing, speaking, consultancy and charity, as chairman of fundraising for Leukaemia and Lymphoma Research, and a leading ambassador for the mental health campaign, Time to Change. He lives in North London with his partner of 33 years, Fiona Millar. They have three children. His interests include running, cycling, bagpipes and Burnley Football Club. He has published five volumes of diaries, including the bestselling The Blair Years, a memoir on depression, The Happy Depressive, a novel about fame, Maya, and his first acclaimed novel about mental illness, All in the Mind.

GOR000825867
All in the Mind by Alastair Campbell
Alastair Campbell
Used - Very Good
Paperback
Cornerstone
2008-11-08
304
0099528029
9780099528029
N/A
Book picture is for illustrative purposes only, actual binding, cover or edition may vary.
This is a used book - there is no escaping the fact it has been read by someone else and it will show signs of wear and previous use. Overall we expect it to be in very good condition, but if you are not entirely satisfied please get in touch with us.