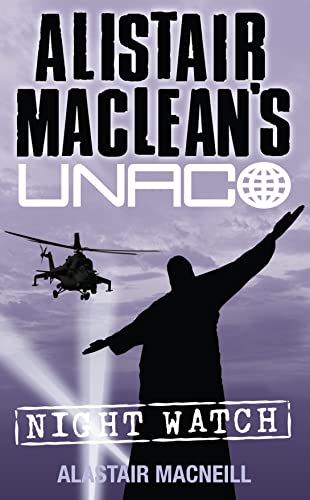 Someone has stolen the world's most famous painting and replaced it with a fake. When the mission looks impossible, the world calls upon UNACO.

Someone has stolen the world's most famous painting and replaced it with a fake. When the mission looks impossible, the world calls upon UNACO.

After lengthy negotiations the Rijksmuseum in Amsterdam agrees to send its priceless Rembrandt, `Night Watch', on a tour of the world's art galleries. Security is intensive. Even so, when the painting arrives in New York it is discovered to be a fake.

UNACO is immediately called into action. Agents Mike Graham, C.W. Whitlock and Sabrina Carver must find out who is responsible for the brilliant forgery and, most important, who now has the original in his private collection.

Speed and secrecy are vital. The hunt leads them to Rio de Janeiro at Carnival time, where their quarry is secure in his mountain fortress, high above the sea...

GOR002874544
9780006177432
0006177433
Night Watch (Alistair MacLean's UNACO) by Alastair MacNeill
Alastair MacNeill
Alistair MacLean's UNACO
Used - Very Good
Paperback
HarperCollins Publishers
1990-07-16
320
N/A
Book picture is for illustrative purposes only, actual binding, cover or edition may vary.
This is a used book - there is no escaping the fact it has been read by someone else and it will show signs of wear and previous use. Overall we expect it to be in very good condition, but if you are not entirely satisfied please get in touch with us
Trustpilot