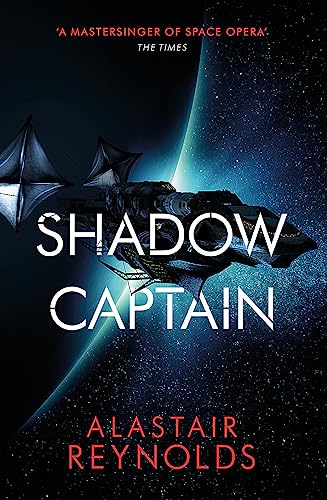 New Price
£8.99
Free Shipping in the UK
Returning to the universe of Revenger, award-winning author Alastair Reynolds delivers another thrilling tale set among the stars.
New£8.99

Returning to the universe of Revenger, award-winning author Alastair Reynolds delivers another thrilling tale set among the stars.

Two sisters ran away from home to join the crew of a spaceship. They took on pirates, faced down monsters and survived massacres . . . and now they're in charge. Captaining a fearsome ship of their own, adventures are theirs for the taking - and there's hoards to loot and treasures to find in the darkest reaches of space. But the rules are also more relaxed out on the fringes, as they're about to discover . . .

'By far the most enjoyable book Reynolds has ever written' SFX

Pirates in space, full of peril and high-jinks... This is a novel that's elegantly plotted, full of surprises and, as first time round, rip-roaring fun. * SFX MAGAZINE *
Reynolds is easily one of the modern masters of science fiction... addictive, page-turning stuff. * STARBURST *
This is a story to break hearts and make you turn pages. It's great stuff; pick it up, you'll want to know what happens next. * SF AND F REVIEWS *
Much of the fun of these books comes from the construction of a far, far-future space-opera... the mapping of Age of Sail tropes onto space travel is just the start... Nevertheless, at the centre of this baroque masquerade party resides a sober consideration of what it might mean to go off adventuring, what it might cost. * LOCUS MAGAZINE *

NGR9780575090651
Shadow Captain by Alastair Reynolds
Alastair Reynolds
Revenger
New
Paperback
Orion Publishing Co
2019-09-05
432
0575090650
9780575090651
N/A
Book picture is for illustrative purposes only, actual binding, cover or edition may vary.
This is a new book - be the first to read this copy. With untouched pages and a perfect binding, your brand new copy is ready to be opened for the first time.