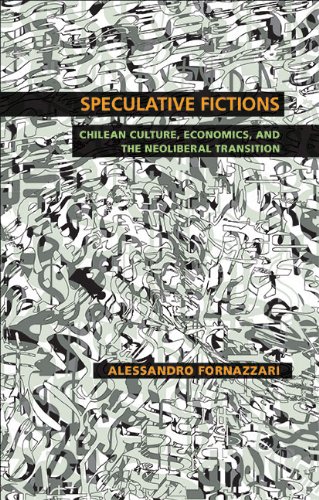 Speculative Fictions views the Chilean neoliberal transition as reflected in cultural production from the post-dictatorship era of the 1970s to the present. To Alessandro Fornazzari, the move to market capitalism effectively blurred the lines between economics and aesthetics, perhaps nowhere more evidently than in Chile.

Through exemplary works of film, literature, the visual arts, testimonials, and cultural theory, Fornazzari reveals the influence of economics over nearly every aspect of culture and society. Citing Karl Marx, Michel Foucault, Walter Benjamin, Willy Thayer, Milton Friedman, and others, Fornazzari forms the theoretical basis for his neoliberal transitional discourse as a logical progression of capitalism.

Fornazzari identifies Casa de campo, Jose Donoso's allegory of the military coup of 1973 and the ensuing monetary crisis, as a harbinger of transitional texts, challenging them to explore new forms of abstraction. Those forms are explored in the novels Oir su voz by Arturo Fontaine and Mano de obra by Diamela Eltit, where Fornazzari examines divergent views of workers in the form of neoliberal human capital or post-Fordist immaterial labour. In documentaries by Patricio Guzman and Silvio Caiozzi, he juxtaposes depictions of mass mobilisation and protest to the mass marketing of individual memory and loss, claiming they serve as symbols of the polarities of dictatorship and neoliberalism. Fornazzari then relates the subsuming of the individual under both fascism and neoliberalism by recalling the iconic imbunche (a mutilated figure whose orifices have been sewn closed) in works by Donoso and the visual artist Catalina Parra. He continues the theme of subsumption in his discussion of the obliteration of the divide between physical labour and intellectualism under neoliberalism, as evidenced in the detective novel A la sombra del dinero by Ramon Diaz Eterovic.

In these examples and others, Fornazzari presents a firmly grounded theoretical analysis that will appeal to Latin Americanists in general and to those interested in the intersection of economics and culture. The Chilean experience provides a case study that will also inform students and scholars of neoliberal transitions globally.

"Alessandro Fornazzari's brilliantly argued book sheds new light on the neoliberal turn that transformed Chile's public discourse since 1973. His compelling and sophisticated readings of novels, films, and essays constitute an important contribution to our understanding of the ways in which cultural artifacts work through the traumatic effects of the economic reshaping of the social sphere. From the political mediation of commodity fetishism on aesthetic grounds to the failure of allegory as a transitional form and the necessity and impossibility of critical restitution, Fornazzari's creative reinscriptions of crucial theoretical notions turn contemporary fiction into a privileged social space for the interpretation of Chile's political and economical unconscious."
--Mariano Siskind, Harvard University
"Many books and articles have been published on the Chilean transition to democracy and on the impact of neoliberal policies on the country. Speculative Fictions, however, stands alone. I am particularly struck by the author's elegant, simple, and apparently effortless rendering of highly complex theoretical material. Much of the pleasure in reading this work comes from its sophisticated and almost seamless fusing of theoretical points with cultural analysis."
--Horacio Legras, University of California, Irvine

"The immense virtue of Fornazzari's book is that it quickly points us away from its somewhat simplistic premises and towards the far more interesting task of exploring the real complexity, the paradoxes and ironies as well as the continuing cruelties, of a society that is in no way as dedifferentiated as its right-wing boosters and many of its left-wing critics would like to think."

"Will be useful to scholars interested in how the logic of business and economic policy has been transferred to noneconomic spheres. . . . Poses important questions that will be the task of future critics to explore and answer."

GOR009959970
Speculative Fictions: Chilean Culture, Economics and the Neoliberal Transition by Alessandro Fornazzari
Alessandro Fornazzari
Used - Very Good
Paperback
University of Pittsburgh Press
2013-05-30
144
0822962330
9780822962335
N/A
Book picture is for illustrative purposes only, actual binding, cover or edition may vary.
This is a used book - there is no escaping the fact it has been read by someone else and it will show signs of wear and previous use. Overall we expect it to be in very good condition, but if you are not entirely satisfied please get in touch with us.