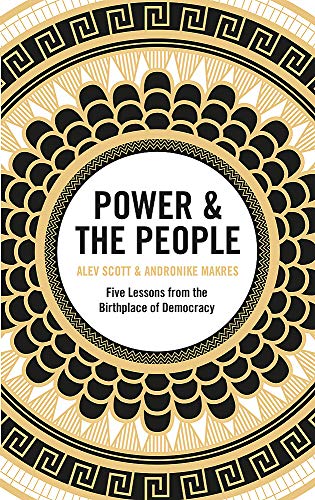 Power & the People
by Alev Scott

New Price
14,99 £
Free Shipping in the UK
An enlightening, entertaining and bitesize book about how Ancient Athenian democracy relates to the most urgent political issues of our day, for fans of Mary Beard's Women & Power and Yanis Varoufakis's Talking to my Daughter about the Economy
New14,99 £

Power & the People: Five Lessons from the Birthplace of Democracy by Alev Scott

DEMOCRACY WAS BORN IN ATHENS. FROM ITS FOUNDING MYTHS TO ITS GOLDEN AGE AND ITS CHAOTIC DOWNFALL, IT'S RICH WITH LESSONS FOR OUR OWN TIMES.

Why did vital civic engagement and fair debate descend into populism and paralysis? Can we compare the demagogue Cleon to President Trump, the Athenian Empire to modern America, or the stubborn island of Melos to Brexit Britain? How did a second referendum save the Athenians from a bloodthirsty decision? Who were the last defenders of democracy in the changing, globalised world of the 4th Century BC, and how do we unconsciously echo them today?

With verve and acuity, the heroics and the critics of Athenian democracy are brought to bear on today's politics, revealing in all its glories and its flaws the system that still survives to execute the power of the people.

Timely and fascinating, this well informed book is highly readable and addresses questions of fundamental importance, as alive for us now as formerly they were for the world's first democracies * Robin Lane Fox *
It renders a potentially intimidating topic instantly readable...with forays into protest, voter apathy and the changing face of political engagement, its arguments are compelling, persuasive and more prescient than ever * All About History *

Alev Scott (Author)
Alev Scott was born in London in 1987 to a Turkish mother and a British father. She studied Classics at Oxford before working in London as an assistant director in theatre and opera. In 2011 she moved to Istanbul, where she taught Latin at the Bosphorus University. Her first book, Turkish Awakening, was published in 2014. Alev writes for numerous publications, including the Guardian. Her second book, Ottoman Odyssey, was shortlisted for the Stanford Dolman Travel Book of the Year Award in 2019. Her third book is Power & the People, written with Andronike Makres.

Andronike Makres (Author)
Andronike Makres is a founding member of the Hellenic Education & Research Center. She graduated from the University of Athens and holds a D.Phil. in Ancient History from Oxford University. Her research focuses on ancient Greek history and epigraphy. She lives in Athens.