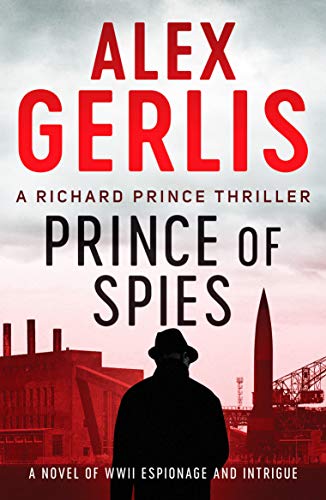 Prince of Spies by Alex Gerlis

Prince of Spies by Alex Gerlis

Find the truth; risk everything. A gripping WWII spy novel full of intrigue and peril from a modern master.

1942: A German spy comes ashore on a desolate stretch of Lincolnshire beach. But he is hunted down by a young detective, Richard Prince. The secret services have need of a man like him...

In occupied Europe, Denmark is a hotbed of problems for British intelligence. Rumours of a war-ending weapon being developed by the Germans are rife.

Sent to Copenhagen, Prince is soon caught in a deadly game of cat and mouse. Dodging Gestapo agents, SS muscle and the danger of betrayal, his survival - and the war effort - hangs in the balance.

Gripping and intense, Prince of Spies is the first in a new espionage series that will delight fans of Alan Furst, Philip Kerr and John le Carre.

Alex Gerlis is the author of the acclaimed Spies series of four Second World War espionage thrillers which are noted for their detailed research and intricate plots and feature two great adversaries: the British spymaster Edgar and his Soviet counterpart Viktor. The television/film rights for The Best of Our Spies have been bought by a major production company. He lives in west London with his wife and family and three black cats.
GOR011238927
Prince of Spies by Alex Gerlis
Alex Gerlis
The Richard Prince Thrillers
Used - Very Good
Paperback
Canelo
2021-01-14
336
180032037X
9781800320376
N/A
Book picture is for illustrative purposes only, actual binding, cover or edition may vary.
This is a used book - there is no escaping the fact it has been read by someone else and it will show signs of wear and previous use. Overall we expect it to be in very good condition, but if you are not entirely satisfied please get in touch with us
Trustpilot