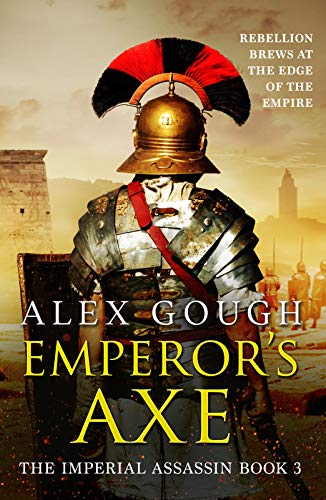 The fate of Rome, and thousands of lives, rests on the shoulders of one man.

After murdering his brother, and taking the position of Emperor for himself, Caracalla orders a brutal purge of the supporters of Geta.

Meanwhile, Caracalla's ally Marcellus has his son suddenly kidnapped. But why? Silus is ordered to track down and rescue the boy, rumoured to be Caracalla's child.

As Rome buckles beneath the weight of slaughter, Silus will travel to the city of Alexandria. There he will need to risk everything to save the boy, the Empire and his own life...

An intense and blood-soaked thriller of Ancient Rome, perfect for fans of Simon Scarrow, Conn Iggulden and Ben Kane.

Alex Gough is an author of Roman historical adventures. The Carbo Chronicles, including Watchmen of Rome and Bandits of Rome, was written as a result of a lifelong obsession with ancient Rome, and the culmination of a lot of research into the underclasses of the time. He has also written a collection of adventures following Carbo and other characters from Watchmen of Rome, where you can learn more about their rich lives.
GOR010743236
Emperor's Axe by Alex Gough
Alex Gough
The Imperial Assassin
Used - Very Good
Paperback
Canelo
2020-04-16
336
1788638301
9781788638302
N/A
Book picture is for illustrative purposes only, actual binding, cover or edition may vary.
This is a used book - there is no escaping the fact it has been read by someone else and it will show signs of wear and previous use. Overall we expect it to be in very good condition, but if you are not entirely satisfied please get in touch with us
Trustpilot