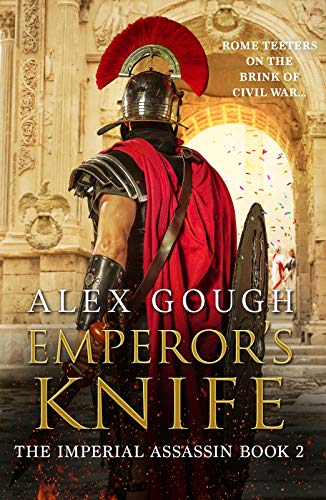 Brothers. Emperors. Deadly enemies... An unputdownable novel of intrigue and combat in Rome.

Emperor Severus is on his deathbed. His sons Geta and Caracalla, feuding in Britannia, are readying for a devastating power struggle.

Silus, now a centurion in the Arcani, the secretive network of spies and killers, is thrown into the maelstrom. Back in Rome, plots breed in the stinking alleys.

Everyone might be an enemy. Everyone a traitor. As an Imperial Assassin, Silus' loyalty will be tested to breaking point. And with the Empire starting to buckle under the strain, Silus must ask what matters: Rome or his own damned soul?

From thundering races at the Circus Maximus to death in the Imperial palaces, this is a powerful and unputdownable novel that will transport to you Ancient Rome, perfect for fans of Ben Kane, Simon Scarrow and Conn Iggulden.

Alex Gough is an author of Roman historical adventures. The Carbo Chronicles, including Watchmen of Rome and Bandits of Rome, was written as a result of a lifelong obsession with ancient Rome, and the culmination of a lot of research into the underclasses of the time. He has also written a collection of adventures following Carbo and other characters from Watchmen of Rome, where you can learn more about their rich lives.

GOR010765754
Emperor's Knife by Alex Gough
Alex Gough
The Imperial Assassin
Used - Like New
Paperback
Canelo
2020-04-02
368
1788638298
9781788638296
N/A
Book picture is for illustrative purposes only, actual binding, cover or edition may vary.
The book has been read, but looks new. The book cover has no visible wear, and the dust jacket is included if applicable. No missing or damaged pages, no tears, possible very minimal creasing, no underlining or highlighting of text, and no writing in the margins.