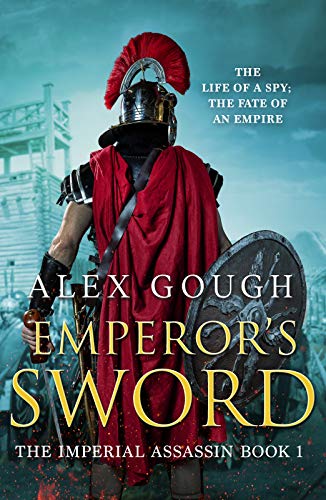 Roman scout Silus is deep behind enemy lines in Caledonia. As he spies on a raiding party, he is abruptly discovered by an enemy chief and his son.

Mounting a one man ambush, everything quickly goes wrong. Silus must run for his life, the head of the enemy leader in his hands. Little does he know the price he will pay...

As Silus is inducted into the Arcani, an elite faction of assassins and spies, he must return to Caledonia, back into the wilderness, and risk everything in the service of his Caesar. The odds don't look good.

Failure is not an option.

'Gritty and real, exciting and pacy, this is first rate historical fiction, and Gough is clearly ready to take his place among the leading writers of the genre' SJA Turney, author of the Praetorian series

Alex Gough is an author of Roman historical adventures. The Carbo Chronicles, including Watchmen of Rome and Bandits of Rome, was written as a result of a lifelong obsession with ancient Rome, and the culmination of a lot of research into the underclasses of the time. He has also written a collection of adventures following Carbo and other characters from Watchmen of Rome, where you can learn more about their rich lives.

GOR010609188
Emperor's Sword: An unputdownable novel of Roman adventure by Alex Gough
Alex Gough
The Imperial Assassin
Used - Very Good
Paperback
Canelo
2020-04-02
384
1788638158
9781788638159
N/A
Book picture is for illustrative purposes only, actual binding, cover or edition may vary.
This is a used book - there is no escaping the fact it has been read by someone else and it will show signs of wear and previous use. Overall we expect it to be in very good condition, but if you are not entirely satisfied please get in touch with us.