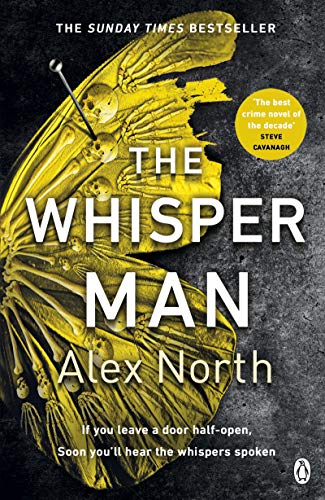 The Whisper Man by Alex North

A RICHARD & JUDY PICK
SUNDAY TIMES BESTSELLER
NEW YORK TIMES BESTSELLER
A GUARDIAN BOOK OF THE YEAR
'The best crime novel of the decade' Steve Cavanagh
'Both terrifying and utterly heartbreaking' Mark Billingham
'Superbly creepy . . . it might just break your heart a little, too' Heat
'A dark, creepy, thriller with a huge amount of heart' Stuart MacBride
'Beautifully crafted, heart-rending and spine-tinglingly chilling' Sarah Pinborough
'Shades of Thomas Harris and Stephen King but brilliant in its own right' C. J. Tudor
______________

If you leave a door half-open, soon you'll hear the whispers spoken...

Fifteen years ago, a serial killer known only as 'The Whisper Man' wreaked havoc on the sleepy village of Featherbank.

But with the killer behind bars, the village is now a safe haven for Tom and his young son Jake to make a fresh start.

Until another boy goes missing. It feels like history is repeating itself.

Could the killer still be out there - and can Tom protect his son from becoming the next victim?
___________