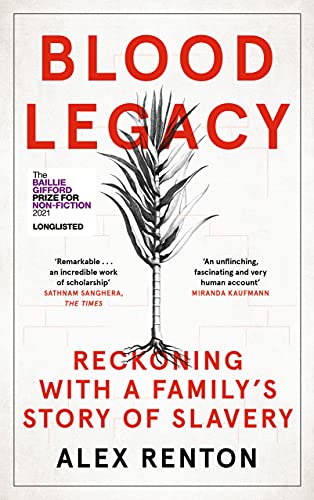 Blood Legacy: Reckoning With a Family's Story of Slavery by Alex Renton

Selected as a Best Book of 2021 by the Evening Standard

Through the story of his own family's history as slave and plantation owners, Alex Renton looks at how we owe it to the present to understand the legacy of the past. When British Caribbean slavery was abolished across most of the British Empire in 1833, it was not the newly liberated who received compensation, but the tens of thousands of enslavers who were paid millions of pounds in government money. The descendants of some of those slave owners are among the wealthiest and most powerful people in Britain today.

A group of Caribbean countries is calling on ten European nations to discuss the payment of trillions of dollars for the damage done by transatlantic slavery and its continuing legacy. Meanwhile, Black Lives Matter and other activist groups are causing increasing numbers of white people to reflect on how this history of abuse and exploitation has benefited them.

Renton . . . dismantles the myths with the efficiency of someone shelling pistachios for a snack . . . remarkable . . . an incredible work of scholarship -- SATHNAM SANGHERA * * The Times * *
In this unflinching, fascinating and very human account, drawn from his own family papers, Alex Renton takes a crucial first step towards reparation, by acknowledging the cruel reality of his ancestors' callous exploitation of enslaved people's labour from afar; detailing the damage done, and both asking and beginning to answer the question of what can be done to purge these sins and their legacies today -- MIRANDA KAUFMANN, author of Black Tudors
Blood Legacy is a moving, timely, well-written and strikingly thoughtful book that makes an important contribution to the growing debate on the horrors that accompanied Britain's empire-building. Alex Renton's forensic and remarkably honest analysis of his own family papers, and the profound darkness they contain, highlights our continuing failure to acknowledge the extreme toxicity of so much of our Imperial history -- WILLIAM DALRYMPLE
Moving and deeply researched, Alex Renton's account of his ancestors' slaveholding brings home the everyday brutality of Caribbean slavery and its contribution to the making of Britain both then and since. Blood Legacy sets the ordinariness of slaveholding in the eighteenth-century monied world alongside accounts of the extraordinary lives of those they owned. This is a book that asks white Britons to look hard at our past and its consequences in the present -- PROFESSOR DIANA PATON
A fascinating family history of profit and loss made during slavery in the Caribbean. This book is truth not fiction -- PROFESSOR SIR GEOFF PALMER
The kind of history I wish they'd taught me in school; Renton takes the yellowed old papers from his grandfather's study and with them weaves a vivid, gripping, modern retelling of a historical abomination . . . Unearthing even a portion of the stories of the slaves Renton's family bought, transported, exploited and ultimately killed feels like a necessary first step towards a modest degree of redemption -- GAVIN FRANCIS
Blood Legacy is far more than one man's mea culpa for his family's role in the slave trade and the benefits bestowed on him as a result. It asks that most urgent of moral questions: what do I do about it now? Renton is clear, if we cannot change our past we can certainly do something about the consequences that still flow from it - the racism, the inequality and injustice that still blights the lives of the descendants of those who were once enslaved. Blood Legacy is a full frontal challenge to those who enjoy a comfortable, liberal life - it's time to stand up and be counted -- GEORGE ALAGIAH
This moving and powerful book asks one of the most important moral questions of our age: how are we to repair the historic damage done by transatlantic slavery? Reparation is the answer, but it is too grudging a word. We should not heal the sins of our past because we are pressured to do so. We should do it joyfully, because it is the right thing to do -- RICHARD HOLLOWAY
Blood Legacy is destined to at once prompt and shape an urgent public conversation, long overdue, that we can only hope will be guided by the core contention of Renton's bracing work: that it's the responsibility of all of us who belong to societies shaped by the Triangle Trade not merely to confront the torrid legacies of slavery, but to change them. Remarkably researched, searchingly told, this is an exemplary book - and a necessary one -- JOSHUA JELLY-SCHAPIRO
How should Britons reckon with the wrongs of slavery? Those wrongs cannot be put right, but recognition of that history matters, an essential step forward if we are to build a better future. Alex Renton's honest exploration of his own family's history as Caribbean slave-owners, based on an extraordinary archive, is an important contribution to this work -- CATHERINE HALL, Chair of the Centre for the Study of the Legacies of British Slave-Ownership

Alex Renton is a journalist who has won awards for his work as an investigator, war correspondent and food policy writer. He has also worked for Oxfam, in East Asia, Haiti and on the Iraq war. Most recently he has been a columnist on the Times and a correspondent for Newsweek magazine. He lives in Edinburgh with his family.