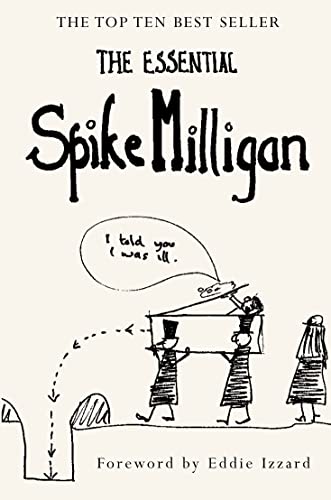 A Spike Milligan opus, containing everything from classics to hidden gems, with a foreword by Eddie Izzard.

A Spike Milligan opus, containing everything from classics to hidden gems, with a foreword by Eddie Izzard.

This stunning anthology of Spike Milligan's work comprises of favourites from his classic books (`Adolf Hitler: My Part in his Downfall', `Goodbye Soldier', `Puckoon'...) as well as scripts from the now-classic Goon Show. Interspersing such comic genius is also a touching collection of letters and his celebrated and liberating writings on depression, demonstrating the diverse talent of a man whose creative output spanned over half a century.

A selection of children's poetry and writings (`Unspun Socks for A Chicken's Laundry', `A Book of Milliganimals', `Silly Verse for Kids' and much more) reveals Spike's irresistible connection with the childlike imagination and a brillant sense of the ridiculous. All the favourite and funniest stories are there. For those who want an excellent introduction to the mind of Milligan or a welcome return to a much-loved genius, this is the ultimate Milligan reader.

`Wonderful anthology. A superbly sustained piece of comedy. Like so mush else in this collection, these excerpts inspire a return to the source.' Chris Power, The Times

`The most comprehensive compendium of the troubled genius' work. This volume spans his entire career...making this a testament to one of our most absurdly talented comedians. Poignant, nonsensical and hilarious. The Essential Spike Milligan is a more than appropriate epitaph.' Ben Arnold, Jockey Slut

`A joyous and wondrous thing...Alex Games has done a fine job...A sound and neatly timed volume and perfect for filling a Milligan-shaped gap in anyone's life.' Marcus Berkmann, Literary Review

Spike Milligan was born in 1918 to a British military family in the Raj. Young Spike fought the Nazis in Europe before being invalided out. After the war, he wrote and performed throughout the '50s in The Goon Show, with Peter Sellers and Harry Secombe. In the '60s he had success as a stage and film actor. Frail but still active into his Eighties, his one-man shows were always sell-out events. In 1992 he was made an honorary CBE, and in 2000 and 2001 he received two Lifetime Achievement Awards: for writing and for comedy. Spike Milligan died in 2002.
Alexander Games was comedy critic of the Evening Standard for six years and is the author of `Pete & Dud: An Illustrated Biography' and `Backing into the Limelight: The Biography of Alan Bennett'.

GOR000489016
The Essential Spike Milligan by Alexander Games
Alexander Games
Used - Very Good
Paperback
HarperCollins Publishers
2003-06-02
352
0007155115
9780007155118
N/A
Book picture is for illustrative purposes only, actual binding, cover or edition may vary.
This is a used book - there is no escaping the fact it has been read by someone else and it will show signs of wear and previous use. Overall we expect it to be in very good condition, but if you are not entirely satisfied please get in touch with us.