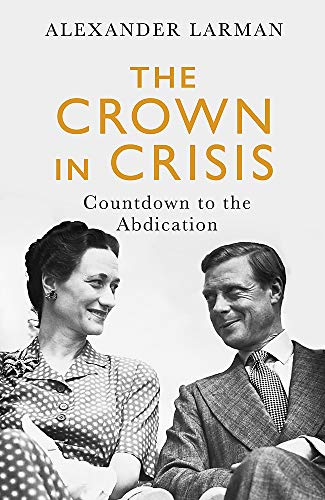 The Crown in Crisis
by Alexander Larman

The Crown in Crisis Summary

The Crown in Crisis: Countdown to the Abdication by Alexander Larman

In December 1936, Britain faced a constitutional crisis that was the gravest threat to the institution of the monarchy since the execution of Charles I. The ruling monarch, Edward VIII, wished to marry the American divorcee Wallis Simpson and crown her as his Queen. His actions scandalised the establishment, who were desperate to avoid an international embarrassment at a time when war seemed imminent. That the King was rumoured to have Nazi sympathies only strengthened their determination that he should be forced off the throne, by any means necessary.
An influential coalition formed against him, including the Prime Minister Stanley Baldwin, his private secretary Alec Hardinge, the Archbishop of Canterbury and the editor of the Times. Betrayal and paranoia were everywhere, as MI5 bugged his telephone and his courtiers turned against him. Edward seemed fated to give up Wallis and remain a reluctant ruler, or to abdicate his throne. Yet he had his own supporters, too, including Winston Churchill, the Machiavellian newspaper proprietor Lord Beaverbrook and his brilliant adviser Walter Monckton. They offered him the chance to remain on the throne and keep Wallis. But was the price they asked too high? And what really lay behind the assassination attempt on Edward earlier that year?
Using previously unpublished and rare archival material, and new interviews with those who knew Edward and Wallis, The Crown in Crisis is the conclusive exploration of how an unthinkable and unprecedented event tore the country apart, as its monarch prized his personal happiness above all else. This seismic event has been written about before but never with the ticking-clock suspense and pace of the thriller that it undoubtedly was for all of its participants.
The Crown in Crisis is the definitive book about the events of 1936. Painstakingly researched, incisively written and entirely fresh in its approach, it will bring the events of that time to thrilling life, and in the process appeal to an entirely new audience.

The Crown in Crisis Reviews

Excellent, well written, deeply researched, THE CROWN IN CRISIS is a dynamic revisionist history of the Abdication that brings to life a national and personal drama with a flamboyant cast of princes, charlatans, socialites, courtiers, press barons, politicians and adventurers that is both heartbreaking and glamorous, scholarly and very entertaining. * Simon Sebag Montefiore author of The Romanovs *
Alexander Larman's well-researched and well-written THE CROWN IN CRISIS is both scholarly and highly readable. He has mastered the sources superbly, and his analysis of the extraordinary story is full of thought-provoking insights. * Andrew Roberts, author of Churchill: Walking with Destiny *
Larman combines the personal with the political, high drama with low morals, to create a compulsively readable and comprehensive account. Anyone who wants to deepen their understanding of one of the key events of the 20th century, whose reverberations are still with us today, must read this engagingly fun and detailed book. * Anne Sebba *
A completely fascinating and authoritative account of the Abdication Crisis, written with tremendous sophistication and insight. * William Boyd *

Alexander Larman is a historian and journalist. He is the author of three previous acclaimed books of historical and literary biography. He writes for the Times, Observer and Telegraph, as well as The Spectator and The Critic. He lives in Oxford.

NGR9781474612579
The Crown in Crisis: Countdown to the Abdication by Alexander Larman
Alexander Larman
New
Hardback
Orion Publishing Co
2020-07-09
352
1474612571
9781474612579
N/A
Book picture is for illustrative purposes only, actual binding, cover or edition may vary.
This is a new book - be the first to read this copy. With untouched pages and a perfect binding, your brand new copy is ready to be opened for the first time.