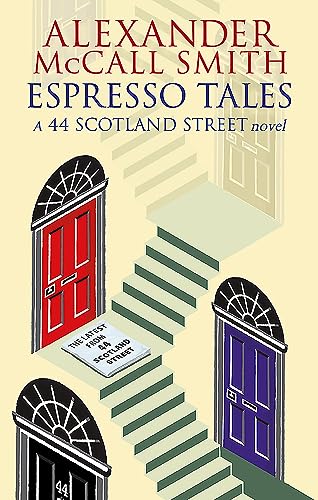 In Stock
£3.59
The second in the series of Alexander McCall Smith's daily novel about the residents of 44 Scotland Street
Very Good
37 in stock

In Espresso Tales, Alexander McCall Smith returns home to Edinburgh and the glorious cast of his own tales of the city, the residents of 44 Scotland Street, with a new set of challenges for each one of them.
Bruce, the intolerably vain and perpetually deluded ex-surveyor, is about to embark on a new career as a wine merchant, while his long-suffering flatmate Pat MacGregor, set up by matchmaking Domenica Macdonald, finds herself invited to a nudist picnic in Moray Place in the pursuit of true love. Prodigious six-year-old Bertie Pollock wants a boy's life of fishing and rugby, not yoga and pink dungarees, and he plots rebellion against his bossy, crusading mother Irene and his psychotherapist Dr Fairbairn. But when Bertie's longed-for trip to Glasgow with his ineffectual father Stuart ends with Bertie taking money off legendary Glasgow hard man Lard O'Connor at cards, it looks as though Bertie should have been more careful what he wished for. And all the time it appears that both Irene Pollock and Dr Fairbairn are engaged in a struggle with dark secrets and unconscious urges of their own.

It is hard to think of a contemporary writer more genuinely engaging...(his) novels are also extremely funny: I find it impossible to think about them without smiling * Craig Brown, Mail on Sunday *
A treasure of a writer whose books deserve immediate devouring * Marcel Berlins, Guardian *
As warm as cocoa, as cosy as thermal underwear, and just what the doctor ordered for the cold winter evenings * THE TIMES *

Following a distinguished career as a Professor of Medical Law, Alexander McCall Smith has turned to writing full-time. He is the author of over sixty books on a wide array of subjects, and his books have been translated into thirty-six languages. He lives in Edinburgh with his wife.

GOR000352953
Espresso Tales by Alexander McCall Smith
Alexander McCall Smith
44 Scotland Street
Used - Very Good
Paperback
Little, Brown Book Group
2006-04-01
352
0349119708
9780349119700
N/A
Book picture is for illustrative purposes only, actual binding, cover or edition may vary.
This is a used book - there is no escaping the fact it has been read by someone else and it will show signs of wear and previous use. Overall we expect it to be in very good condition, but if you are not entirely satisfied please get in touch with us.