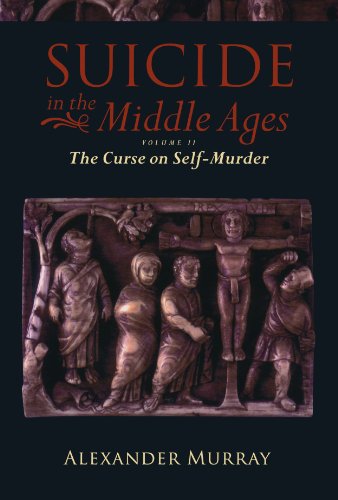 In Stock
£45.99
In The Curse on Self-Murder, the second volume of Suicide in the Middle Ages, Alexander Murray explores the origin of the condemnation of suicide, in a quest which leads along the most unexpected byways of medieval theology, law, mythology, and folklore.
Very Good
Only 1 left

Suicide in the Middle Ages, Volume 2: The Curse on Self-Murder by Alexander Murray (University College, Oxford)

A group of men dig a tunnel under the threshold of a house. Then they go and fetch a heavy, sagging object from inside the house, pull it out through the tunnel, and put it on a cow-hide to be dragged off and thrown into the offal-pit. Why should the corpse of a suicide - for that is what it is - have earned this unusual treatment? In The Curse on Self-Murder, Alexander Murray explores the origin of the condemnation of suicide, in a quest which leads along the most unexpected byways of medieval theology, law, mythology, and folklore -and, indeed, in some instances beyond them. At an epoch when there might be plenty of ostensible reasons for not wanting to live, the ways used to block the suicidal escape route give a unique perspective on medieval religion.

Review from previous edition No other work on the history of thought and action touches it * Spectator *
Fascinating comments on medieval law and culture ... This is a book of breathtaking learning, full of insights on a great range of aspects of medieval culture, not least because, as Murray so brilliantly shows, the issue of suicide threw up so many paradoxes and anomalies within legal and ethical systems of thought and practice. * Journal of Ecclesiastical History *
Murray's description of Emile Durkheim's book on suicide can be applied to his own monumental work - 'long, cogent, lucid and unobtrusively tender'. * English Historical Review *
This is an astonishing and very individual work. Its range and erudition are prodigious. Monumental labour and great fixity of vision and purpose will have been needed to create it. The grand design is kept in view all the time while the interlocking subordinate parts and arguments move forward. * English Historical Review *
We could hope for no better guide. * Margaret Atkins, The Tablet *
It will become the definitive study almost as a by-product. * Contemporary Review *
His most excellent dissection of the body of the judiciary in post-Conquest England cuts through records of coroners and the eyre rolls, as well as King's Bench in Westminster ... Suffice to say, his explication of legal records is nothing less than brilliant ... This is truly a history book for historians...I devoured it with a good strong claret before the fireplace. * David Lederer, The Medieval Review *
Book of the year chosen by Eric Christiansen * The Spectator *

GOR009934884
Suicide in the Middle Ages, Volume 2: The Curse on Self-Murder by Alexander Murray (University College, Oxford)
Alexander Murray (University College, Oxford)
Used - Very Good
Paperback
Oxford University Press
2011-03-03
662
0199553181
9780199553181
N/A
Book picture is for illustrative purposes only, actual binding, cover or edition may vary.
This is a used book - there is no escaping the fact it has been read by someone else and it will show signs of wear and previous use. Overall we expect it to be in very good condition, but if you are not entirely satisfied please get in touch with us.