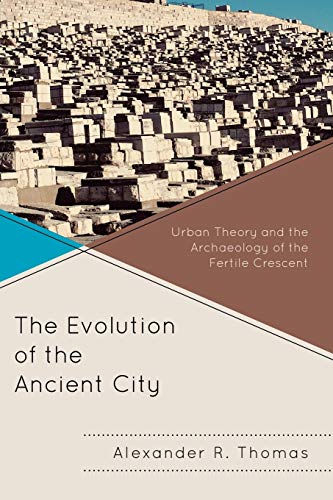 The Evolution of the Ancient City
by Alexander R. Thomas

In Stock
£21.99
The Evolution of the Ancient City is an interdisciplinary look at how cities developed from Hunter-Gatherer societies to centers of vast empires in the Fertile Crescent between 21,500 BCE and 1,200 BCE. The reader is guided through each stage of social evolution and its consequences for our understanding of modern cities. As a result, urban theory must adapt to this long-range view of the city.
Very Good
Only 1 left

The Evolution of the Ancient City Summary

The Evolution of the Ancient City: Urban Theory and the Archaeology of the Fertile Crescent by Alexander R. Thomas

Urban theory and archaeology merge to create a readable discussion of how ancient cities came to be. Although many consider our modern social ills to be the consequence of Capitalism, many urban problems are traceable to pre-Capitalist times and thus are more related to Urbanization. Ancient cities shared many characteristics with modern cities. For instance, the ancient cities of Rome and Carthage at the time of Christ had population densities approaching that of Manhattan Island today. The Canaanites, fifteen hundred years before, lived in cities oriented toward trade and dependent upon mass production of such items as wine, olive oil, and the pottery to contain such goods. Over three thousand years before the Common Era, the city of Uruk was part of a larger "global system" that resembled in its own way the globalization that we know today. Cities first arose in Mesopotamia about 5,500 years ago, but for 5,500 years before the rise of cities the small agricultural village was the most complex form of human social organization-clearly there was nothing inevitable about the city. The Evolution of the Ancient City explores what we can learn of modern cities by tracing the development of ancient cities.

The Evolution of the Ancient City Reviews

Alexander R. Thomas is associate professor of sociology at SUNY College at Oneonta and the coauthor of Critical Rural Theory (2011), also available from Lexington Books.

GOR010200910
The Evolution of the Ancient City: Urban Theory and the Archaeology of the Fertile Crescent by Alexander R. Thomas
Alexander R. Thomas
Comparative Urban Studies
Used - Very Good
Paperback
Lexington Books
2012-06-07
232
0739138707
9780739138700
N/A
Book picture is for illustrative purposes only, actual binding, cover or edition may vary.
This is a used book - there is no escaping the fact it has been read by someone else and it will show signs of wear and previous use. Overall we expect it to be in very good condition, but if you are not entirely satisfied please get in touch with us.