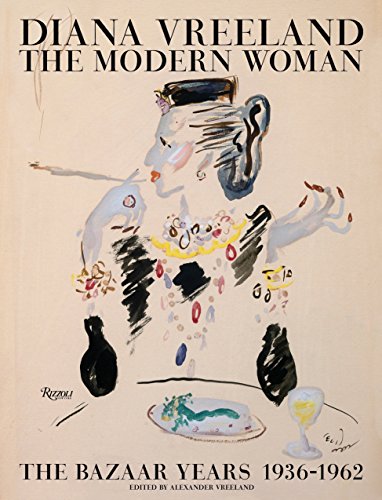 Out of Stock
£14.99
The first Vreeland book to focus on her three decades at Harper's Bazaar, where the legendary editor honed her singular take on fashion.
Very Good
Only 0 left

The first Vreeland book to focus on her three decades at Harper's Bazaar, where the legendary editor honed her singular take on fashion. In 1936, Harper's Bazaar editor in chief Carmel Snow made a decision that changed fashion forever when she invited a stylish London transplant named Diana Vreeland to join her magazine. Vreeland created "Why Don't You?"--an illustrated column of irreverent advice for chic living. Soon she was named the magazine's fashion editor--a position that Richard Avedon later famously credited Vreeland with inventing. The troika of Snow, legendary art director Alexey Brodovitch, and Vreeland formed a creative collaboration that continued Harper's Bazaar's dominance as America's leading fashion magazine. As World War II changed women's role in society, Vreeland's love for fashion and endless imagination provided exciting, modern imagery for this new paradigm. This book covers Vreeland's three-decade tenure at Bazaar, revealing how Vreeland reshaped the role of the fashion editor by introducing styling, creative direction, and visual storytelling. Her innovative perspective and creative working relationships with photographers such as Richard Avedon, Cecil Beaton, Louise Dahl-Wolfe, Lillian Bassman, and Hoyningen-Huene brought the American woman into a modern world. Through more than 300 images from the magazine, this book shows how Vreeland's work not only influenced her readership, but also forged the path for modern fashion storytelling that endures today.

"Featuring every magazine cover under her direction, the book also presents a selection of editorial features that best illustrate her visionary perspective and creative collaborations with industry veterans."
-BlouinArtinfoBlogs.com

"Dive into the three decades Diana Vreeland spent at Harper's Bazaar and marvel at her matchless expertise and distinct view within the fashion industry."
-THE SOCIETY DIARIES

"If you've ever wanted to peer into the mindset of a creative visionary at the helm of a major publication, this book offers just that. Featuring every issue of Harpers Bazaar under her keen eye, this lovely book gives us a closer look at Vreeland's influence over the magazine and a visual history of her celebrated editorial eye."
-LIFE IN A VENTI CUP BLOG

"What raises [Diana Vreeland: Modern Woman] above the rest is that it replicates the actual pages laid out by Vreeland, as seen in Harper's each month from the '30s to the '60s. They elevate the book to the level of visual primer: a 'how to' for stylists, photographers, models and, above all, art directors. . . As this book shows, Vreeland knew more about the value of white space and the pithy epithet than any other editor of her time."
-THE BUSINESS OF FASHION

"This is a must have, must read, must see book that can only delight those who revel in fashion. Alexander Vreeland reminds us all that his grandmother was indeed the high priestess of fashion. Thank you for this great souvenir and recollection of just how astoundingly and fashionably brilliant she was!"
-THE NEW YORK JOURNAL OF BOOKS

GOR010300160
Diana Vreeland: The Modern Woman: The Bazaar Years 1936-1962 by Alexander Vreeland
Alexander Vreeland
Used - Very Good
Hardback
Rizzoli International Publications
2015-10-01
304
0847846083
9780847846085
N/A
Book picture is for illustrative purposes only, actual binding, cover or edition may vary.
This is a used book - there is no escaping the fact it has been read by someone else and it will show signs of wear and previous use. Overall we expect it to be in very good condition, but if you are not entirely satisfied please get in touch with us.