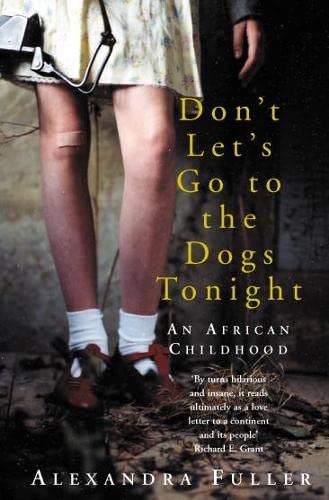 Don't Let's Go to the Dogs Tonight
by Alexandra Fuller

In Stock
£5.49
`Told with all the intensity of Lorna Sage's Bad Blood ' The Times
Very Good Good Well Read
12 in stock

Don't Let's Go to the Dogs Tonight: An African Childhood by Alexandra Fuller

Alexandra Fuller was the daughter of white settlers in 1970s war-torn Rhodesia. Don't Let's Go to the Dogs Tonight is a memoir of that time, when a schoolgirl was as likely to carry a shotgun as a satchel. Fuller tells a story of civil war; of a quixotic battle against nature and loss; and of her family's unbreakable bond with a continent which came to define, shape, scar and heal them. In wry and sometimes hilarious prose, she looks back with rage and love at an extraordinary family and an extraordinary time.

`A book that deserves to be read for generations' Guardian

`Perceptive, generous, political, tragic, funny, stamped through with a passionate love for Africa . . . [Fuller] has a faultless hotline to her six-year-old self' Independent

`Wonderful book . . . a vibrantly personal account of growing up in a family every bit as exotic as the continent which seduced it . . . the Fuller family itself [is] delivered to the reader with a mixture of toughness and heart which renders its characters unforgettable' Scotsman

`Her prose is fierce, unsentimental, sometimes puzzled, and disconcertingly honest . . . it is Fuller's clear vision, even of the most unpalatable facts, that gives her book its strength. It deserves to find a place alongside Olive Schreiner, Karen Blixen and Doris Lessing' Sunday Telegraph

Alexandra Fuller was born in England in 1969. She moved to Rhodesia (now Zimbabwe) with her family when she was two. After that country's war of independence (1980) her family moved first to Malawi and then Zambia. She came to the United States in 1994. Her book Don't Let's Go to the Dogs Tonight won the Winifred Holtby Memorial Prize in 2002 and a finalist for the Guardian First Book Award. Scribbling the Cat won the Lettre Ulysses Award for the Art of Reportage in 2006.

GOR001143005
Don't Let's Go to the Dogs Tonight: An African Childhood by Alexandra Fuller
Alexandra Fuller
Used - Very Good
Paperback
Pan Macmillan
2003-01-03
320
0330490192
9780330490191
Short-listed for Guardian First Book Award 2002 (UK) Long-listed for BBC Four Samuel Johnson Prize 2002 (UK)
Book picture is for illustrative purposes only, actual binding, cover or edition may vary.
This is a used book - there is no escaping the fact it has been read by someone else and it will show signs of wear and previous use. Overall we expect it to be in very good condition, but if you are not entirely satisfied please get in touch with us.