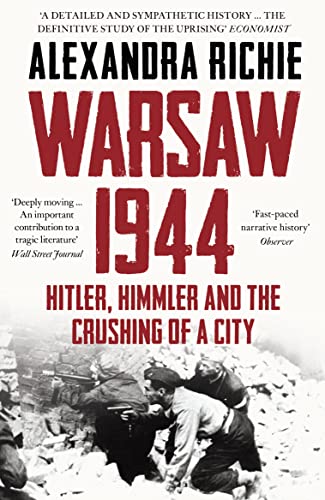 The traumatic story of one of the last major battles of World War II, in which the Poles fought off German troops and police, street by street, for sixty-three days.

Warsaw 1944: Hitler, Himmler and the Crushing of a City by Alexandra Richie

The traumatic story of one of the last major battles of World War II, in which the Poles fought off German troops and police, street by street, for sixty-three days.

The Warsaw Uprising of August 1944 was a shocking event in a hideous war. This is the first account to recall the tragedy from both German and Polish perspectives and asks why, when the war was nearly lost, Hitler and Himmler decided to return to Warsaw bent on murder, deportation, and destruction.

This was the only time in history that a European capital has ever been emptied of its entire population and destroyed entirely. Hundreds were thrown from windows, burned alive, trampled to death. The murder of 40,000 innocents on 5th August was the largest battlefield massacre of the war.

But the Poles did not give in. Organized and popular, the Uprising, which had been expected to last under a week, fought off German troops including Himmler's most notorious SS battalions street by street, for sixty-three days.

Using first-hand accounts, Richie charts the atrocities and the breakdown of SS morale, but she also goes on to examine the long-term implications of Stalin's refusal to help and how the Uprising affected negotiations over the fate of post-war Europe, sowing the seeds of the Cold War. But above all else 'Warsaw 1944' is the story of a city's unbreakable spirit, in the face of unspeakable barbarism.

'Unusually well-placed to research and rehearse the story of that terrible event ... [Richie] offers a comprehensive narrative of the Polish experience' Max Hastings, Sunday Times

'Richie's detailed and sympathetic history ... draws heavily on private archives and recounts many unpublished stories. Such survivors' testimony make it the definitive study of the uprising' Economist

'Chronicled with astonishing precision by historian and Warsaw resident ... this grim and chilling book delivers exhaustive and unforgettable details of this gruesome chapter of World War II' Publishers Weekly

'A detailed, if harrowing, narrative history of the rising. Richie has mastered an immense range of material in both German and Polish ... There are powerful first person accounts ... impressively accomplished in terms of research and narrative ... Readers ... will gain an understanding of an extraordinary event' BBC History Magazine

'Most impressive. She explodes many myths, and is more balanced and judicious than some previous writers ... Richie brings it magnificently alive' Rodric Braithwaite, author of 'Afgansty'

'Beautifully written and judicious, this is by far the best account of the Warsaw Uprising to date' Christopher Szpilman

'Must be the most detailed and harrowing account of the uprising staged by the Polish Home Army ... ever published, and is likely to be of lasting value to scholars and general readers alike ... this extraordinarily detailed account of a two-month bloodbath creates a vast monument to an often neglected event' TLS

'A sympathetic portrait of the struggle waged by Polish insurgents and the civilians caught up in it ... As a detailed narrative of the brutal crushing of the uprising as seen through civilian eyes ... 'Warsaw 1944' is an important contribution to a tragic literature' Wall Street Journal

Alexandra Richie is the author of the critically acclaimed 'Faust's Metropolis: A History of Berlin'. Dr Richie received her DPhil at St. Antony's College, Oxford, and was later a Fellow of Wolfson College. She has lectured on international politics and history across the world, from Warsaw University to the Getty Museum in Los Angeles. She lives in Warsaw with her husband and two children.

GOR006110499
Warsaw 1944: Hitler, Himmler and the Crushing of a City by Alexandra Richie
Alexandra Richie
Used - Very Good
Paperback
HarperCollins Publishers
2014-08-25
704
0007180438
9780007180431
N/A
Book picture is for illustrative purposes only, actual binding, cover or edition may vary.
This is a used book - there is no escaping the fact it has been read by someone else and it will show signs of wear and previous use. Overall we expect it to be in very good condition, but if you are not entirely satisfied please get in touch with us.