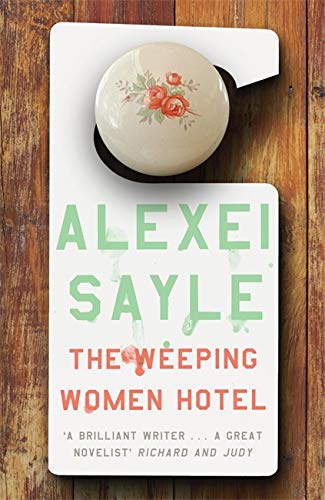 Northern girl Harriet lives and works on a London estate which is a battleground between the white working class plus the immigrants versus the newly arrived middle class focaccia-eaters.

Unhappy and overweight, she hires a personal trainer who lures her into joining the martial arts class he runs. There she learns the regime of the completely phoney martial arts master and embarks on a spiritual and literal journey which leads her to a hotel opposite the railway station at Crewe, the Weeping Women Hotel.

Sayle proves once again that he is no literary dilettante but the real thing * Daily Express *
'Alexei Sayle excels. THE WEEPING WOMEN HOTEL is an enjoyable page-turner with a curious plot. If you like your weirdness with warmth and wit, Sayle's your man.' * Metro *
A brilliant writer...a great novelist * Richard and Judy *
He just seems to keep getting better and better - more supple, more confident and more violent. This is a funny, frightening book which is also refreshingly bonkers. It's meticulously plotted and persuasive. * Guardian *
'Sayle's energy has been boiling over in collections of short stories and novels of immense literary sophistication - books that are also bed-wettingly funny ... With his high-spirited loathing of pretension, he could be our new Kingsley Amis.' * Roger Lewis, Sunday Express *
'This is a novel composed of surreal flights of fancy and spot-on comedy.' * Katy Guest, Independent *

Alexei Sayle is a comedian, actor, presenter and writer. His television work as a writer and performer includes The Young Ones, Alexei Sayle's Stuff, and The All New Alexei Sayle Show. He has written regularly for the Observer, Indepedent, Time Out, Car Magazine and Esquire and he has appeared in numerous films, from Indiana Jones and the Last Crusade to Gorky Park and Swing.

GOR000657287
Weeping Women Hotel by Alexei Sayle
Alexei Sayle
Used - Very Good
Paperback
Hodder & Stoughton General Division
2007-05-17
272
0340831227
9780340831229
N/A
Book picture is for illustrative purposes only, actual binding, cover or edition may vary.
This is a used book - there is no escaping the fact it has been read by someone else and it will show signs of wear and previous use. Overall we expect it to be in very good condition, but if you are not entirely satisfied please get in touch with us.