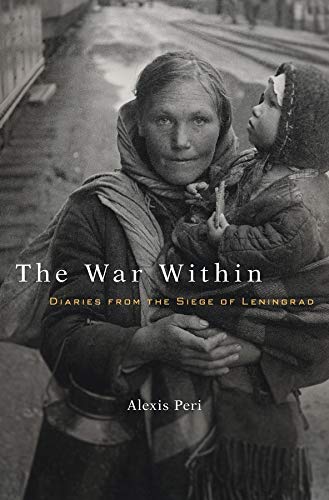 The War Within
by Alexis Peri

In Stock
£20.99
The German blockade of Leningrad lasted 872 days and cost almost a million civilian lives one of the longest, deadliest sieges in modern history. Drawing on 125 unpublished diaries written by individuals from all walks of life, Alexis Peri tells the tragic, intimate story of how citizens struggled to make sense of a world collapsing around them.
Very Good
Only 2 left

The War Within Summary

The War Within: Diaries from the Siege of Leningrad by Alexis Peri

In September 1941, two and a half months after the Nazis invaded the Soviet Union, the German Wehrmacht encircled Leningrad. Cut off from the rest of Russia, the city remained blockaded for 872 days, at a cost of almost a million civilian lives, making it one of the longest and deadliest sieges in modern history.

The War Within chronicles the Leningrad blockade from the perspective of those who endured the unendurable. Drawing on 125 unpublished diaries written by individuals from all walks of Soviet life, Alexis Peri tells the tragic story of how citizens struggled to make sense of a world collapsing around them. Residents recorded in intimate detail the toll taken on minds and bodies by starvation, bombardment, and disease. For many, diary writing became instrumental to survival--a tangible reminder of their humanity. The journals also reveal that Leningraders began to reexamine Soviet life and ideology from new, often critical perspectives.

Leningrad's party organization encouraged diary writing, hoping the texts would guide future histories of this epic battle. But in a bitter twist, the diarists became victims not only of Hitler but also of Stalin. The city's isolation from Moscow made it politically suspect. When the blockade was lifted in 1944, Kremlin officials censored publications describing the ordeal and arrested hundreds of Leningrad's wartime leaders. Many were executed. Diaries--now dangerous to their authors--were concealed in homes, shelved in archives, and forgotten. The War Within recovers these lost narratives, shedding light on one of World War II's darkest episodes.

The War Within Reviews

A remarkable record of 125 unpublished diaries written by the blokadniki who endured the 872-day siege of Leningrad from 1941-44... Much has been written about Leningrad's heroic resistance. But the remarkable aspect of the Boston University professor's book is that she tells a very different story: recounting the internal struggles of ordinary people desperately trying to survive and make sense of their fate.-- (06/10/2018)
From 1941 until 1944, the city of Leningrad was under siege from Germany and Finland for a total of 872 days; almost one million citizens perished during that time. Peri takes readers on a terrifying journey of the turmoil faced by the residents of Leningrad via reviewing and synthesizing 125 unpublished diaries from those imprisoned in the city, the Blokadnik or Siege of Leningrad survivors...Readers interested in the effects of a military siege on individuals will find much to digest here. Moreover, history buffs will learn new information about the people of Leningrad during this terrible time.-- (12/01/2016)
In this fascinating analysis of the experience of average Soviet citizens during the Siege of Leningrad, Peri investigates the everyday experiences of the blokadniki, those who survived for over 900 days during the German blockade of the city during WW II. Using 125 unpublished diaries, [Peri] provides a unique perspective on those who lived inside the 'ring' created by the German siege.-- (07/01/2017)
Stand aside, Homer. I doubt whether even the author of the Iliad could have matched Alexis Peri's account of the 872-day siege which Leningrad endured after Hitler's army encircled the city in September 1941...[A] magnificent narrative.-- (12/28/2016)
By mining an extraordinarily rich treasure trove of unpublished diaries, Peri moves beyond relating what happened during the blockade and instead explains how Leningraders made sense of it. Sophisticated, nuanced, and extremely well written, The War Within is a major contribution to our understanding of the mentality of Leningrad's civilians during the blockade and the role that diaries played in Soviet history.--Richard Bidlack, coauthor of The Leningrad Blockade, 1941-1944: A New Documentary History from the Soviet Archives
In the winter of 1941-1942, civilians in blockaded Leningrad lived on the very edge of death. Conveying their life stories and struggles with great sensitivity, Peri draws on more than a hundred largely unpublished diaries to explore how the external crisis provoked an internal crisis that destabilized Leningraders' fundamental understandings of themselves, the Soviet Union, and the world.--Lisa A. Kirschenbaum, author of The Legacy of the Siege of Leningrad, 1941-1995: Myth, Memories, and Monuments
Vivid, true, and magnificently crafted. Peri has peeled away layer after layer of the human record to its core--physical, mental, spiritual.--Nina Tumarkin, author of Lenin Lives!
Diaries from the Stalin era tend to be analyzed in numbers too small to provide more than a glimpse of everyday life. Here, however, Peri has assembled over a hundred of these rare records, which allows for unprecedented insight into the trials and tribulations that ordinary people experienced during one of their greatest ordeals: the 900-day siege of Leningrad. This is a truly groundbreaking study.--David Brandenberger, author of Propaganda State in Crisis: Soviet Ideology, Indoctrination, and Terror under Stalin, 1927-1941

Alexis Peri is Assistant Professor of History at Boston University.

GOR008629683
The War Within: Diaries from the Siege of Leningrad by Alexis Peri
Alexis Peri
Used - Very Good
Hardback
Harvard University Press
2017-01-06
302
0674971558
9780674971554
N/A
Book picture is for illustrative purposes only, actual binding, cover or edition may vary.
This is a used book - there is no escaping the fact it has been read by someone else and it will show signs of wear and previous use. Overall we expect it to be in very good condition, but if you are not entirely satisfied please get in touch with us.