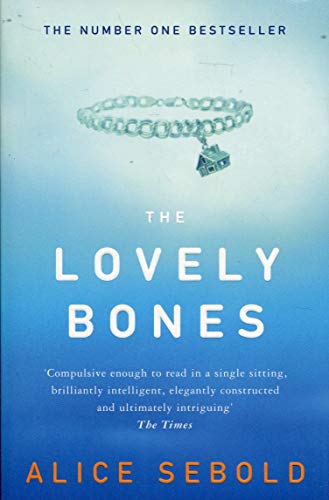 The Lovely Bones
by Alice Sebold

Used Price
£2.69
New RRP £9.99
Free Shipping in the UK
A haunting and heartbreaking novel narrated from heaven as a young girls watches over her family and killer.
Very Good Good

The Lovely Bones by Alice Sebold

The internationally bestselling novel that inspired the acclaimed film directed by Peter Jackson.

My name was Salmon, like the fish; first name, Susie. I was fourteen when I was murdered on December 6, 1973.

In heaven, Susie Salmon can have whatever she wishes for - except what she most wants, which is to be back with the people she loved on earth. In the wake of her murder, Susie watches as her happy suburban family is torn apart by grief; as her friends grow up, fall in love, and do all the things she never had the chance to do herself. But as Susie will come to realize, even in death, life is not quite out of reach . . .

A luminous, astonishing novel about life and death, memory and forgetting, and finding light in the darkest places, Alice Sebold's The Lovely Bones became an instant classic when it was first published in 2002. It inspired the film starring Mark Wahlberg, Rachel Weisz, Susan Sarandon and Saoirse Ronan.

Spare, beautiful and brutal prose . . . The Lovely Bones is compulsive enough to read in a single sitting, brilliantly intelligent, elegantly constructed and ultimately intriguing. * The Times *
Moving and compelling . . . It will put an imperceptible but stealthily insistent hold on you. I sat down in the morning to read the first couple of pages; five hours later, I was still there, book in hand, transfixed. -- Maggie O'Farrell * Sunday Telegraph *

Alice Sebold is the author of the bestselling novels The Lovely Bones and The Almost Moon, and the memoir Lucky. She lives in California.

GOR000470082
The Lovely Bones by Alice Sebold
Alice Sebold
Used - Very Good
Paperback
Pan Macmillan
2003-06-06
336
0330485385
9780330485388
Winner of National Book Awards Richard and Judy Best Read of the Year 2004 (UK) Winner of Specsavers Platinum Bestseller Award 2017 (UK)
Book picture is for illustrative purposes only, actual binding, cover or edition may vary.
This is a used book - there is no escaping the fact it has been read by someone else and it will show signs of wear and previous use. Overall we expect it to be in very good condition, but if you are not entirely satisfied please get in touch with us.