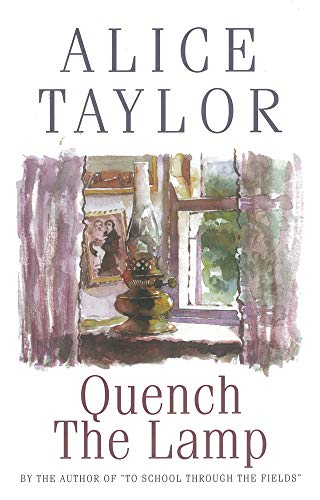 Quench the Lamp by Alice Taylor

Infused with wit and lyricism, this memoir centres on the 1950's when the author and her friends were teenagers. She describes the past vividly and without complaint as the years of hard labour for herself, parents and siblings, were also filled with fun in the close knit community.

Quench the Lamp by Alice Taylor

A classic memoir from Ireland's favourite storyteller. Here Taylor follows To School Through The Fields with these equally captivating recollections of family life in pastorial County Cork. Infused with wit and lyricism, the story centres on the 1950's when the author and her friends were teenagers. She describes the past vividly and without complaint as the years of hard labour for herself, parents and siblings, were also filled with fun in the close knit community.

Alice Taylor lives in the village of Innishannon in County Cork, in a house attached to the local supermarket and post office. Since her eldest son has taken over responsibility for the shop, she has been able to devote more time to her writing. Alice Taylor worked as a telephonist in Killarney and Bandon. When she married, she moved to Innishannon where she ran a guesthouse at first, then the supermarket and post office. She and her husband, Gabriel Murphy, who sadly passed away in 2005, had four sons and one daughter. In 1984 she edited and published the first issue of Candlelight, a local magazine which has since appeared annually. In 1986 she published an illustrated collection of her own verse. To School Through the Fields was published in May 1988. It was an immediate success, and quickly became the biggest selling book ever published in Ireland. It launched Alice on a series of signing sessions, talks and readings the length and breadth of Ireland. Her first radio interview, forty two minutes long on RTE Radio's Gay Byrne Show, was the most talked about radio programme of 1988, and her first television interview, of the same length, was the highlight of the year on RTE television's Late Late Show. Since then she has appeared on radio programmes such as Woman's Hour, Midweek and The Gloria Hunniford Show, and she has been the subject of major profiles in the Observer and the Mail on Sunday. Alice has written nearly twenty books since then, large exploring her village of Inishannon, and the way of life in rural Ireland. She has also written poetry and fiction: her first novel, The Woman of the House, was an immediate bestseller in Ireland, topping the paperback fiction lists for many weeks. One of Ireland's most popular authors, her most recent book is And Life Lights Up.
GOR001498052
9780863221125
0863221122
Quench the Lamp by Alice Taylor
Alice Taylor
Used - Very Good
Paperback
O'Brien Press Ltd
1998-01-31
192
N/A
Book picture is for illustrative purposes only, actual binding, cover or edition may vary.
This is a used book - there is no escaping the fact it has been read by someone else and it will show signs of wear and previous use. Overall we expect it to be in very good condition, but if you are not entirely satisfied please get in touch with us
Trustpilot