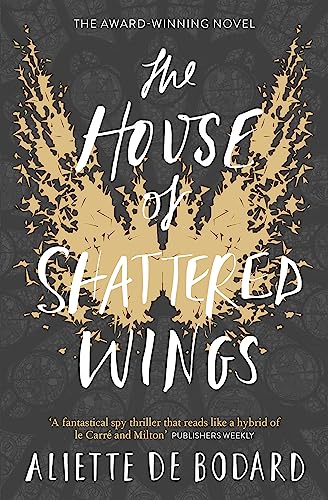 The House of Shattered Wings
by Aliette de Bodard

Used Price
£4.99
New RRP £8.99
Free Shipping in the UK
A superb murder mystery, on an epic scale, set against the fall out - literally - of a war in heaven
Reviews:
Trustpilot
Very Good

The House of Shattered Wings Summary

The House of Shattered Wings by Aliette de Bodard

Paris in the aftermath of the Great Magicians War. Its streets are lined with haunted ruins, Notre-Dame is a burnt-out shell, and the Seine runs black, thick with ashes and rubble. Yet life continues among the wreckage. The citizens retain their irrepressible appetite for novelty and distraction, and The Great Houses still vie for dominion over France's once grand capital.
House Silverspires, previously the leader of those power games, now lies in disarray. Its
magic is ailing; its founder, Morningstar, has been missing for decades; and now something
from the shadows stalks its people inside their very own walls.
Within the House, three very different people must come together: a naive but powerful Fallen, an alchemist with a self-destructive addiction, and a resentful young man wielding spells from the Far East. They may be Silverspires' salvation; or the architects of its last, irreversible fall . . .

The House of Shattered Wings Reviews

an intriguing mystery, elegantly written... with carefully crafted characters both with layers and depth, De Bodard reflects the best and worst of human nature in her novel * The Guardian *
I strongly urge you to get House of Shattered Wings: it offers something a little different; a superb blend of intrigue, mystery and magic and urban fantasy; it's brilliantly written; and the story is gripping. I can't wait for the sequel. Very highly recommended. * CIVILIAN READER *
Reading this novel felt like a very intimate experience, the characters and landscape are so well developed with such detail that one feels as if they are walking alongside them as the story unfolds... Ambience abounds in this novel. * Geek Syndicate *
Aliette de Bodard has made a name for herself imagining futures and alternate histories that showcase non-Western cultural landscapes and characters...this is smart and nuanced storytelling * SFX *
Fascinating, moving and hugely readable * SCI-FI NOW *
This book is wreathed in mythology, magic and mysticism and it is such a compelling read that maybe the book itself is magic * Fantasy Book Review *
There's an intelligence-and, yes, an elegance-to The House of Shattered Wings that is as rare and precious as angel essence. * TOR.COM *
The devastated Paris of Aliette de Bodard's novel is especially haunting. This is partly because de Bodard, a Nebula Award-winning French-Vietnamese writer, lives in Paris and can convey a visceral sense of immediacy to a ruined Notre Dame or the remains of the grand department stores, and partly it's because of the sheer lyricism of her prose...A series of mysterious deaths turns the novel into a surprising but compelling murder mystery, which plays out according to the supernatural terms de Bodard has laid out so evocatively. * The Chicago Tribune *
De Bodard aptly mixes moral conflicts and the desperate need to survive in a fantastical spy thriller that reads like a hybrid of le Carre and Milton, all tinged with the melancholy of golden ages lost. * Publishers Weekly *
In the end, de Bodard manages to weave together the backstories and fates of the various characters...into a novel that is both haunting and original, its sense of loss almost palpable, and it setting not quite like anything else in modern fantasy. * Locus *
Aliette de Bodard presents a gritty, otherworldly Paris in her fast-paced, fantastical thriller. * The Washington Post *
It's a grim story with high-flown conventions, but by finding so much ugliness even in supernatural beauty, de Bodard makes both seem more compelling, and more concrete. * NPR.com *
A fascinating Paris of decay and cruelty. -Phillippe is a marvel of a character. * Library Journal *
French-Vietnamese author Aliette de Bodard ventures into the realm of gothic fantasy and manages to create - despite the hoary premise of fallen angels and ancient curses - something startlingly and creepily original. * The Guardian *
The House of Shattered Wings is an enthralling and fully submerging read with an intriguing power structure and a setting that has both an unknown and yet familiarly gothic feel to it. * WE LOVE THIS BOOK *
I have said previously in a review of her work that Aliette de Bodard is a writer who deserves attention...and The House of Shattered Wings is the perfect way to discover her work * SF Signal *
Its intriguing mix of mythos and magic is a perfect introduction to Aliette de Bodard's new creation and I'm already looking forward to sequels. This is definitely Paris like you've never seen before. * Upcoming4Me *
Stylishly written, this is the most original piece of fiction - I find that "Fantasy" is far too restrictive - you're likely to come across this year. A wonderful introduction to Aliette de Bodard, who is already an award-winning short story writer, The House of Shattered Wings is an excellent showcase for this mighty talent and adds yet another author to this reader's "must-read" list. * READER DAD *
This is a story unlike anything I've read before. Two aspects have burned an impression into my mind: the unusual tale itself and the writing - the beautiful, almost unearthly writing. * Fantasy Faction *
If you are on the lookout for something fresh and exciting in Dark Urban Fantasy, this is the book for you. * The Book Plank *
The House of Shattered Wings is a murder mystery set in a sumptuous and enchanting world, that will draw you in with it's vivid world weaving, and infectious atmosphere. * Realitysabore *
The House of Shattered Wings is many things. It's a murder mystery. It's a post-apocalyptic survival tale. It's a steel-cold look at protagonists who are antiheroes. It's a slow-burn Gothic narrative with plenty of tension and a sense of impending doom that retains elegance and poise and never comes crashing down. Bodard's worldbuilding is rich, her writing is sophisticated, almost regal in style. But more importantly, and poignantly, The House of Shattered Wings is also a story about imperialism, about displacement and belonging, about loyalties and the desperate desire to simply return to your own tribe. * STRANGE HORIZONS *
With a combination of mythologies and folklore, The House of Shattered Wings is filled with beautiful descriptive settings, interesting and diverse characters, magic and the alchemy. It is a place where Paris is dark, beautiful, ruined and magical... just like the Fallen who rule it. * BOOK NERD REVIEWS *
It is a great mix of styles that come together in a satisfyingly complex web of magic and intrigue and I'm looking forward to exploring this world further in book two. * SF Crowsnest *

Aliette de Bodard is one of the Writers of the Future, has won two Nebula Awards, a Locus Award and a BSFA Award. She has also been a finalist for the Hugo, Sturgeon, and Tiptree Awards, making her one of our most-lauded contemporary fiction writers. A writer by night, by day she is a qualified engineer, specialising in Applied Mathematics. She lives in Paris, in a flat with more computers than she really needs. You can learn more at www.aliettedebodard.com or by following @aliettedb on twitter.

GOR007723104
The House of Shattered Wings by Aliette de Bodard
Aliette de Bodard
Used - Very Good
Paperback
Orion Publishing Co
2016-07-28
432
147321257X
9781473212572
N/A
Book picture is for illustrative purposes only, actual binding, cover or edition may vary.
This is a used book - there is no escaping the fact it has been read by someone else and it will show signs of wear and previous use. Overall we expect it to be in very good condition, but if you are not entirely satisfied please get in touch with us.